Great news for Stephen Pearcy and Ratt fans as the singer has finished recording his fifth solo album, which will be titled View To A Thrill and released via Frontiers Music Srl sometime in 2018. 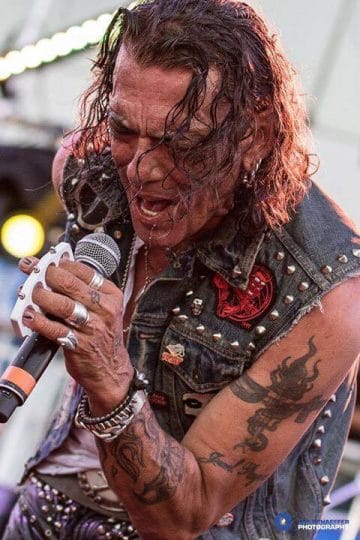 The following message was posted on Pearcy‘s Facebook page back on May 6, 2018:

Pearcy‘s last solo album Smash finished at #8 on the Sleaze Roxx Readers’ Top 20 Albums of 2017 to which Sleaze Roxx stated: “Ratt (with Stephen Pearcy and Warren DeMartini at the helm) continue to be one of the most popular bands to grace Sleaze Roxx‘s website. Then again, when you have so many great albums like Out Of The Cellar (1984), Invasion Of Your Privacy (1985), Dancing Undercover (1986) and even 2010’s Infestation (which landed the #2 album on the Sleaze Roxx’s Top Ten Albums of 2010 and the #1 record on the Sleaze Roxx Readers’ Top 20 Albums of 2010), it’s no surprise for a band to still have such a strong following decades after first bursting onto the scene. While Ratt seemingly take one hiatus after another, their frontman Stephen Pearcy continues to make music and his fourth solo album Smash turned out to be one of the great surprises of the year. Pearcy‘s voice sounds really good on the album and he provides a lot of variety for his fans from Ratt like tunes such as “Ten Miles Wide” and “Jamie” to Arcade era like songs such as “Want Too Much.” Pearcy seemingly covers it all. With Pearcy having recently announced that he will start recording his fifth solo album, it will be interesting to see what we get first — a new Ratt album or a new Pearcy solo album. Whatever the case, Pearcy rarely disappoints and Smash continues his trend of solid album material.”