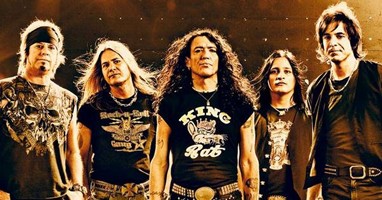 Ratt Hoping To Release New Studio Album In The Summer

Ratt is continuing to write songs for their new studio record, the follow-up to their 2010 comeback album ‘Infestation’. Stephen Pearcy, Warren DeMartini, Carlos Cavazo, Robbie Crane and Bobby Blotzer are hoping to finish recording in time for a summer release and tour. Until then, the band may schedule a few surprise shows.

Pearcy and DeMartini have been demoing songs for the currently untitled album as well as working with the Foo Fighter’s Dave Grohl on a separate project.

Vocalist Stephen Pearcy has recently locked in a publisher for the new book (no title yet), which should be finished later this year for an early 2013 release. Look for Pearcy on a new episode of VH-1 Rock & Roll Fantasy Camp, filming in February 2012.

Selling more than 14 million albums in the US alone, and establishing themselves as one of the most popular groups of the 1980s, Ratt returned in 2010 with ‘Infestation’ and new guitarist Carlos Cavazo (of Quiet Riot fame). ‘Infestation’, released on April 20th through Loud & Proud/Roadrunner, peaked at #30 on the Billboard charts during its three week run and went on to land on the Sleaze Roxx Top 10.