Metal Sludge has reported that former Britny Fox guitarist Chris Sanders has apparently been giving “the axe” from Ratt.

Back in early July 2018, Metal Sludge reported that Sanders along with guitarist Jordan Ziff and drummer Pete Holmes were the three new Ratt members that were joining singer Stephen Pearcy and bassist Juan Croucier. The new line-up was often dubbed the 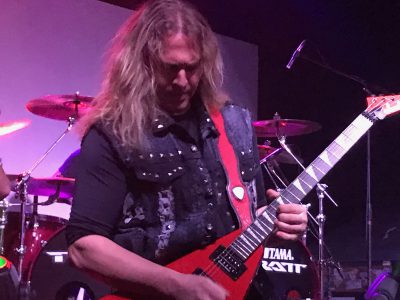 Given Metal Sludge‘s good track record when it comes to announcements such as these, it strongly appears that Sanders‘ departure from Ratt is true.

It’s worth noting that Sanders‘ Facebook profile has apparently been taken down for the time being.

Sleaze Roxx stated the following about Holmes, Sanders and Ziff in its review of Ratt‘s concert at the Showplace Theater in Buffalo, New York, USA on December 12, 2019: “I was interested to see how Ratt‘s “new breed” line-up would fare. I knew that Pete Holmes was a monster on drums having seen him perform with Juan Croucier and Black ‘N Blue in the past and he did not disappoint. The man can really pound those drums! Guitarist Chris Sanders looked a lot like the departed Robbin Crosby with his look and flying V guitars. I don’t think that he’s as tall as Crosby was but it was kind of cool to see Robbin Crosby Jr. in action. Lead guitarist Jordan Ziff is obviously a very talented guitarist and played the Ratt material and presumably DeMartini guitar parts with ease. In fact, Ziff would often play rather complex guitar solos with his eyes closed or while not l0oking at his guitar strings. Clearly, the man has mastered the Ratt material. Ziff was also given a chance to shine as he didn’t play everything note for note the way DeMartini plays and he was seemingly allowed to free style a bit. A few of the songs had a bit of a jam element to them but they still sounded good. In any case, I thought that Ziff, Sanders and Holmes were solid additions to the Ratt line-up.”