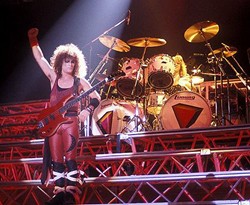 Ratt Rumored To Reunite With Juan Croucier At M3 Festival

When bassist Robbie Crane announced in late March that he was leaving Ratt it left the door open for the return of Juan Croucier. So it should come as no surprise that Metal Sludge is reporting that rumors on the street indicate Croucier will rejoin Ratt on May 12th during their appearance at the M3 Festival — Ratt have neither confirmed nor denied these rumors.

Ratt continues to write songs for their new studio record, the follow-up to their 2010 comeback album ‘Infestation’, and also plan on releasing a compilation collection through iTunes.

Says vocalist Stephen Pearcy, “While Ratt writes and works on the next RoadRunner record 2012, the band will be releasing a compilation record on their own via iTunes. Music from their vaults — un-released and live tracks from 1983-1991.”

Pearcy and guitarist Warren DeMartini have been demoing songs for the currently untitled album as well as working with the Foo Fighter’s Dave Grohl on a separate project.

Pearcy also recently locked in a publisher for the new book (no title yet), which should be finished later this year for an early 2013 release. Look for Pearcy on a new episode of VH-1 Rock & Roll Fantasy Camp, filming in February 2012.

Selling more than 14 million albums in the US alone, and establishing themselves as one of the most popular groups of the 1980s, Ratt returned in 2010 with ‘Infestation’ and new guitarist Carlos Cavazo (of Quiet Riot fame). ‘Infestation’, released on April 20th through Loud & Proud/Roadrunner, peaked at #30 on the Billboard charts during its three week run and went on to land on the Sleaze Roxx Top 10.