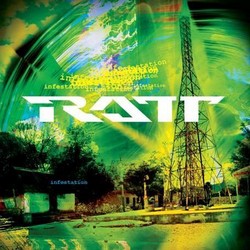 Legendary LA metallers Ratt have unveiled the artwork for their upcoming ‘Infestation’ CD and “Best of Me” — the first single off of their much-anticipated upcoming album. The song is available for purchase at these iTunes and amazon.com links.

Infestation will be released on April 20th through Loud & Proud/Roadrunner Records.

One of the most popular rock acts of the past 20 years, RATT’s brand of guitar-driven melodic rock helped shape the LA metal scene. The band boasts a deep catalog of hits including smashes like “Round and Round,” “Lay It Down,” “You’re In Love,” “Lack of Communication” and “Wanted Man” which are beloved by fans the world over. The band has gone on to sell millions of albums worldwide. With 1984’s mega-platinum debut Out of the Cellar celebrating its 25th anniversary this year, the band is looking forward to starting a new chapter with new music to complement the impressive legacy they have established over two-plus decades.

“This deal is a great opportunity for us to get our new music to RATT fans worldwide,” says frontman Stephen Pearcy. “We are super excited about the new material!”

Over the past two years, RATT has toured the world in support of their releases Tell The World – The Very Best Of Ratt and their first ever DVD, Videos from the Cellar – The Atlantic Years. During this time, the current lineup of Stephen Pearcy, Warren DeMartini, Bobby Blotzer, Robbie Crane and Carlos Cavazo played shows in Australia, Colombia and Peru for the first time in their careers.

“The fans deserve the credit for making this happen. When we saw the band in concert and witnessed their passion and excitement, it was obvious that the time was right for RATT to make new music,” says Tom Lipsky, Loud & Proud President.