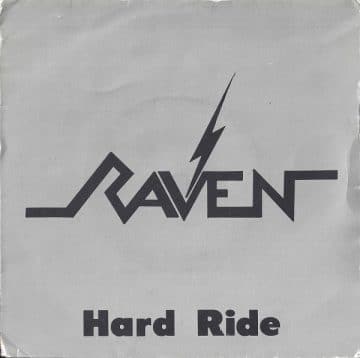 The Raven frontman was asked about the history of the British rockers’ logo, which first graced the cover of the band’s second single, 1981’s “Hard Ride.”

Gallagher replied (as transcribed by the Australian Rock Show):

“I did it – I came up with it. We needed a logo, there’s some early photos (where) you can see this bizarre bird-looking thing – like the ‘V’ is the body of the bird and the ‘R’ and the ‘N’s like a wing and I wasn’t too fond of that.

Then we had this thing which was just like Gothic script floating around. So when we did the (first) single we just used an army stencil version. And we were just looking for something and I was looking at logos like Judas Priest and the Iron Maiden one and said well I like the straight lines – let’s see if the letters in ‘Raven’ would land a straight line there’s really no curves – let’s see what we can come up with. I added the flash and everyone loved it and there you go – it went from there.”

You can listen to the interview with John Gallagher by the Australian Rock Show below:

Performing at The Maywood in Raleigh, North Carolina on Saturday September 14, 2013. Raven was formed in 1974 in Newcastle, England, by brothers John Gallagh…