The Metal Voice recently spoke to Raven‘s frontman John Gallagher who advised that Raven will be recording a new studio album in September 2017. 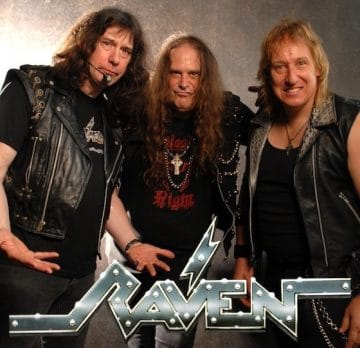 The following is an excerpt from a press release issued by The Metal Voice today (with slight edits):

Prior to the live feed in Ecuador, The Metal Voice asked Gallagher about a the time frame for new Raven album. Gallagher replied, “the band has new management with EMP (David Ellefson of Megadeth) as well as the band going into the studio to record a new album in September 2017. Gallagher said,”We’ve been writing like fiends, I have at least 20 really good songs, going to be a kick ass new album which we will go in and record in September 2017, we are still planning out who we will be doing it with. We also have a new website up go check it out.”

Sleaze Roxx stated the following in its review of Raven‘s last studio album ExtermiNation released back in April 2015: “Wow! Just Wow! This was an incredible surprise. I picked this up on a whim while I was just browsing for something new to listen to. I wasn’t expecting much. In fact, I’d say that my expectations were extremely low for this CD. Frankly, I’ve always considered Raven to be just an okay or average band. Who would have thought, that over forty years after the band’s inception, they would release their best album ever, yes that’s right….I said ever.”