UK rockers Raven will be having their debut album Rock Until You Drop (1981) released as The 4CD Over The Top Edition via Cherry Red Records on May 29, 2022. 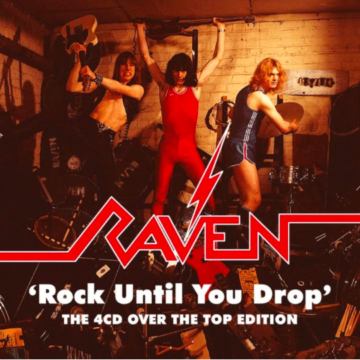 “Rock Until You Drop’ is the best LP to emerge out of the NWOBHM since Saxon’s ‘Wheels Of Steel’.” Geoff Barton, Sounds, 19 September 1981

Although Raven were very much part of the NWOBHM of the late ’70s and early ’80s, brothers Mark and John Gallagher had formulated the idea of creating their own rock group way back in 1972. With John on bass and vocals and Mark on lead guitar, they played their first gig in 1975, building up a loyal following across the North East of England. Recording a rudimentary demo in 1978, included here on CD2. Signed to Neat Records, they recorded further demos, by which time they had trimmed down to a power-trio when the Gallaghers were joined by Rob “Wacko” Hunter on drums. Neat would release their debut 45 ‘Don’t Need Your Money’ in 1980 and make Raven the lead act with ‘Inquisitor’ on the cassette compilation, ‘Lead Weight’.

Raven released their debut LP ‘Rock Until You Drop’ in 1981 successfully capturing the energy of their live shows, the album picked up instant champions across the influential UK rock press, with key features in Kerrang! and Sounds. These would lead 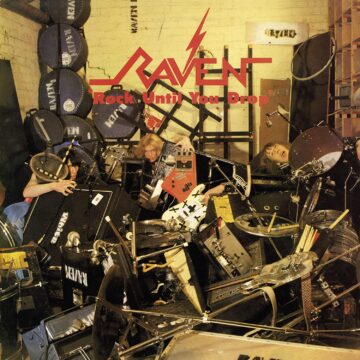 to important shows with Ozzy Osbourne, Whitesnake and Motörhead, among many others. These self-styled “athletic rockers” were a huge influence on future Thrash and Speed Metal bands, such as Slayer, Megadeth, and Testament, and also on Metallica, with whom they would later co-headline with.

Their live sound was captured illicitly by a fan on tape while on tour in Italy in December 1982, and is featured here in its entirety, the collection completed by their May 1982 performance at Manchester’s Apollo.

As well as an extensive essay from NWOBHM expert John Tucker, this “4CD Over The Top Edition” of ‘Rock Until You Drop’ also features a 24 page booklet featuring many rare and unpublished photos supplied from the band’s own archive.

While every effort has been made to ensure optimum sound quality, due to the limitations of the audio sources on some of these recordings, they have been included for their historical importance and do not represent the fidelity of the professional studio recordings.”

Track List for Rock Until You Drop – The 4CD Over The Top Edition: