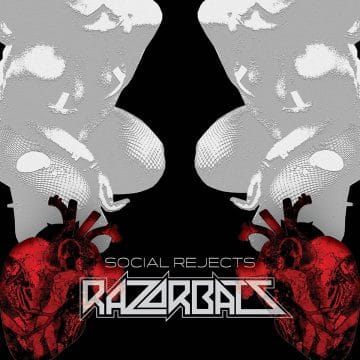 Norwegian rockers Razorbats with their revamped line-up of drummer Knut S. S. Wettre and guitarist Kjetil F. Wevling along with new members — singer Paul Vercouteren, bassist Chris Haugerud and guitarist Asle Tangen — have released a new single entitled “Social Rejects” which will appear on their upcoming new studio album to be released in 2018.

Sleaze Roxx stated the following in the first of two reviews of Razorbats‘ last This High EP: “This is not hard rock, nor is it sleaze. It’s pure punk in attitude and delivery. Production is raw and unencumbered with overdubs or flashy effects. I concur with my predecessor’s review. If you like this style, you owe it to yourself to check out Razorbats.”

In its second of two reviews, Sleaze Roxx stated: “Overall, the This High EP is not as strong as Razorbats‘ prior album Camp Rock but it’s still a good set of songs. Nevertheless, I think that the This High EP serves its purpose since it keeps Razorbats in the limelight while the group works hard to follow up Camp Rock, which is apparently turning into a difficult album to follow up.”