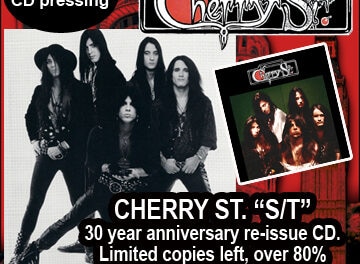 Cherry Street consisting of Chris VanDahl (ex-L.A. Guns) on lead vocals, Tom “Monroe” Mathers and Todd “Taz” Anthony on guitar, Redd Rosell on bass and Tom “Kelly James” Dobrentey on drums have had their self-titled album re-issued by Perris Records. It is a very special release for Perris Records since the album was the first ever CD released by the label back in 1992.

Perris Records has re-issued the 1992 Cherry St. “Self Titled” CD. This was the 1st CD released on the Perris Records label. This is a very special 30 year anniversary 1992-2022 release for Perris and is a limited pressing of only 500 CDs. Without starting any press or radio, the CD has almost sold out before the worldwide release date of April 8th. Over 80% of the CD’s have been sold to Germany & Japan and the rest have been shipped to distribution. Only 50 CDs are left to be sold on the Perris Records website. The original 1992 CD was selling for high dollars on Ebay & Amazon.

In 1990, Cherry St. was offered to tour Texas and soon after the great response from packed shows and hundreds of fans showing up to the instore meet and greets. More tours were booked in 29 states from Boston, Florida and all the way to Hawaii and sharing the bill with such bands as Dangerous Toys, Foreigner, Warrant, April Wine, Vince Neil, Slaughter, Pretty Boy Floyd, and Sweet F.A.. Cherry St. achieved many goals such as being the only unsigned band to have Music Plus Chain stores feature 24″ x 36″ full color poster’s and flats in all the stores in southern California to promote their three-song tape distributed by Important / Relativivity. Many Tower Records also featured the full color posters and flats in stores around southern California. Also in 1990, Cherry St. recorded a home video with many fans and celebrities and featuring the first video “The Walk’ with cameos like Bon Jovi, Sam Kinison (RIP), Tracii Guns, Jani Lane (RIP), Bret Michaels, CC Deville and Lemmy (RIP).

In 1991, Kelly James replaced Razzle on drums and the band headed out on a US tour. In 1992, Jaime Scott joined Tyketto and he was replaced by Redd Rosell. Soon after, the “self-titled” album was released and Cherry St. signed with JRS/BMG to release “Squeeze It Dry”. JRS Records had the Stray Cats and Asia on their roster. Rikki Rockett offered to record Cherry St. at his studio, but because Sass Jordan and Motörhead were still in his studio, Cherry Street would have not made the release date for a summer tour. At a past Roxy club show in Hollywood, Erik Turner and Joey Allen from Warrant introduced Cherry St. The band kept in touch with Erik Turner and he had a production company with Tommy Thayer (KISS, Black ‘N Blue) so they were brought in to produce “Squeeze It Dry”. Erik and Tommy had worked with Pat Regan (KISS, Deep Purple, Shotgun Messiah) so it made perfect sense to finish “Squeeze It Dry” with Pat Regan recording and mixing the CD in his studio.