Whitesnake and Winger guitarist Reb Beach was recently interviewed by Antihero and spoke about some of the differences between both bands in terms of touring and writing. 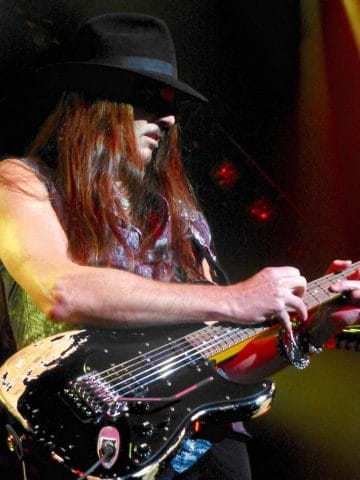 Beach did the interview with Antihero while on a day off from touring with Winger but it was noted that he was promoting the new Whitesnake album Flesh & Blood during the interview. Beach replied: “Yeah, I guess so. We’re going on tour soon. I had a brutal journey yesterday with flights canceled and you know, Winger is so different than Whitesnake. Whitesnake is a cushy tour bus with beautiful hotels and Winger is in the van for 5 hours.” In terms of Winger touring at a more comfortable level at this stage, Beach advised: “It’s, you know, all the money we save we put in our pockets. So, it really benefits us to take the early flights and to, you know, get around the cheapest way possible.”

With respect to writing with Whitesnake frontman David Coverdale, Beach indicated (with slight edit): “I lived with him for a year basically. I just lived there. He has a couple of houses and the house with the studio in it has 2 bedrooms for me and Joel or whoever’s coming in. And, what was the question again? Oh yeah, yeah, with David, we have a writing process and you gotta be in the room with David and I brought in a tonne of ideas but you don’t get a lot of time to play your idea for David and really, the best way to play an idea for David is just to pick up the acoustic and play it. That’s where he gets the most inspiration from. You know, if you play him stuff that’s all produced, he won’t get it and you know, a lot of the ideas I had were just too complicated for Whitesnake. You know, when David likes 3 chord Rock, it’s gotta be just old school, he doesn’t want Rush. Nothing progressive.”

In regard to the mindset that he might adopt when writing for Winger or another musical project, Beach advised (with slight edits): “Yes, it’s totally different. With Winger, like I said Winger is much more progressive and you know, it’s not just a pop rock band, blues pop rock band. And Kip is very complicated when he writes. You know, like he’s really into showing off compositional skills which is great. I love it. I learned so much from him. I actually learned how to write a song from Kip. And then, with David, you go in and he’s already got the idea in his head. He’s just so focused, you know, and it’s bang, bang, bang. You’re only with him for 10 minutes and then, you bang out a verse and a chorus and then we do the rest. Either me, myself or Joel or the both of us but mostly Joel would go there on his own and I would go there on my own. We did a few sessions with the both of us writing together, which was fun.”

In terms of juggling touring schedules for both Whitesnake and Winger, Beach opined: “For the longest time it wasn’t a problem and now it’s becoming a bit of a problem because you know, Rod Morgenstein is 65 years old and we don’t know how much longer Winger is gonna be at it and we definitely wanna do another record. And David, he takes breaks, he’ll take a year off so that’s when Winger goes for it so we work our schedule around Whitesnake. But now that Whitesnake is working a lot more this year is kind of putting Winger on the back burner. He was actually talking about finding someone to sit in for me, finding a sub for me and I don’t know, Andy Timmons, would be a good replacement for me on these days when I’m out with Whitesnake. But you know, in August, Winger’s writing a new record.”

You can read the rest of the interview with Reb Beach at Antihero‘s website.