Whitesnake and Winger guitarist Reb Beach was recently interviewed by Andrew Catania for All That Shreds. Beach spoke about his writing duties or lack thereof when he was in Whitesnake with guitarist Doug Aldrich. 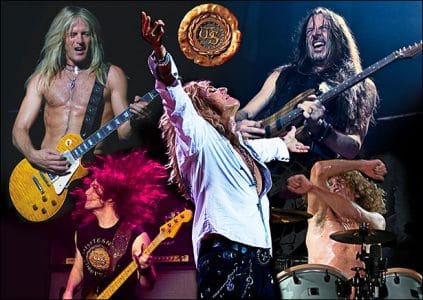 Beach and Aldrich joined Whitesnake in 2002 with Aldrich leaving the group in 2014. Whitesnake released two studio albums during that time — Good To Be Bad in 2008 and Forevermore in 2011 — with all of the songs being co-written by Aldrich and the group’s leader and long-time frontman David Coverdale.

With Aldrich‘s departure in 2014 and former Night Ranger guitarist Joel Hoekstra taking his spot, Beach assumed the lead guitarist duties. Beach was asked if he had more say in Whitesnake‘s upcoming album Flesh & Blood, which will officially be released on May 10th than on prior albums.

Beach replied: “Well, yeah, I’m the music director. (Laughing) Before, I had no say. On anything. I didn’t do any of the writing. I’d show up and play a solo, and that was it. The solo would be mixed incredibly low. And be made to sound as small as possible. (Chuckling). There was the live album wherein Slide It In, Doug starts the song with this huge opening…(demonstrates the sound…laughing). So this time, I was there for the whole making of the record. I wrote with David, made decisions, co-produced, and I picked the songs I wanted to solo on. I gave Joel the rest. I split it right down the middle.”

In terms of whether that happened with Aldrich in the band, Beach advised: “No, no. Doug was in charge. I just came in, played a solo and left. That’s it. I didn’t write anything. I had no say in anything. Not in the production, the mixing or anything. It was all Doug.”

With respect to why he did not have any input when Aldrich was around, Beach opined: “I wanted to write with David. I’m a songwriter. I’m a bonafide songwriter. I’ve written 6 top 40 singles. So I was looking forward to the chance to write with David finally. And it went well. I was a different experience than I thought it would be. It was very enlightening. It goes very quickly when you’re writing with David. (Chuckling) It’s not a long process.”

You can read the rest of the interview with Reb Beach at All That Shreds‘ website.