Vancouver, Washington, USA heavy metal rockers Recker have announced that they now have a new guitarist in Jeff Gephart who will be replacing Pete Brun. Gephart will be joining lead vocalist / bassist Rich Recker, guitarist JK Licktee and drummer Tommy “Stixx” Slaughter in the band. 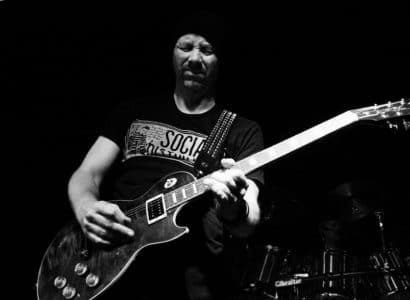 “The wait is finally over! We’d like to announce the addition of Jeff Gephart to the line up! Jeff has been a secret weapon for a lot of bands in the Portland area over the last 30+ years and brings a ton of experience to the band! Our first gig with Jeff will be May 3rd at The Heavy Metal Brewing Co. Please help us welcome Jeff to the band. We’ll see you soon! – Recker“

“Old school baby! Recker‘s new album Manifest Destiny screams old school in every way. From the vintage Judas Priest music to the simple structure and delivery of the songs to the cliché lyrics, Recker will have you thinking of heavy metal from the early ’80s. Being that Sleaze Roxx celebrates ’80s hard rock and heavy metal music, that is of course a good thing. Although I first thought that Manifest Destiny was Recker‘s debut album, in fact the band has released a number of albums since 2009 consisting of the Vita – Amore – Destino EP (2009), Tragedy Or Triumph(2010), the Believe EP (2012), the Let It RockEP (2013) and the compilation album Recker (2015).”