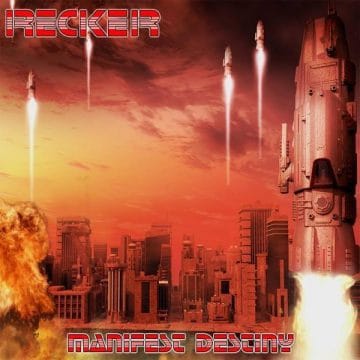 American heavy metal rockers Recker have released a lyric video for their song “King” from their latest studio album Manifest Destiny, which was released back on August 1, 2018.

In an interview with Hair Band Heaven, Recker‘s frontman Rich Recker spoke about some of the songs on Manifest Destiny and advised: “King is about the fact that human beings have used war, religion, and politics to consolidate power for the few and subjugate the masses since the beginning of our existence. All the way back to the early times when we had ritual sacrifices and offerings to the gods and divine right of ascension to the throne. Now, we use politics and war to achieve the same ends. Manifest Destiny is about man’s pursuit of space travel and the fact that we are driven to find “more” and expand our limits as far as they can go. Light It Up is just a “take no shit” kind of song. The inspiration for that song was Jon Bones Jones from the UFC. He was so dominant. You just knew whoever he faced was going to get punished.”

Sleaze Roxx stated as follows in its review of Manifest Destiny:

“Most of the songs on Manifest Destiny have one speed, which is the standard heavy metal fare. My favorites are the faster paced “Hellbound” with its semi-catchy chorus and cool guitar solos; “King” with its heavy guitar riff around which the song centred and the verses sung in a very Lips fashion; “Light It Up” with its main guitar riff that just makes me want to headbang; and the more melodic “Let Us Prey.” Overall, Manifest Destiny is a pretty good album. It takes me back to the more simpler times of the ’80s with the more straightforward heavy metal music and vocals that are rough around the edges but nevertheless seem to work with what is being offered.”