Reckless Love release video for “We Are The Weekend” 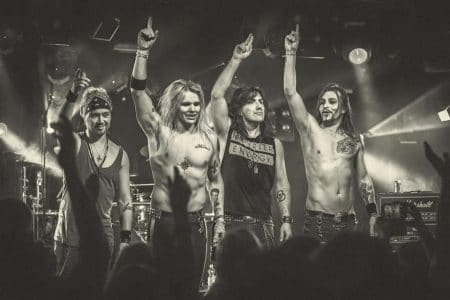 Finnish “merry metal” rockers, Reckless Love, have released a video for their song “We Are The Weekend” from they album InVader, which was released back on March 11, 2016.

Sleaze Roxx stated the following in its review of Reckless Love‘s InVader: “I honestly don’t understand this album by Reckless Love. If they had laid heavy on ballads or mid-tempo rock songs, it would make sense from a mainstream sleaze rock point of view. But going from ’80s fueled sleaze to ’80s greased synth pop? All in eleven songs clocking in at roughly 45 minutes. The band talks in their press releases as doing homage to such legends as Alice Cooper and Mötley Crüe but also having distinctive parts that scream of the influence of such ’90s pop giants as Backstreet Boys or Britney Spears. Well ya, but to a single listener, they’re way off base. You can’t expect a Crüe banger to get on board with Britney Spears. Simple fact. I’d ultimately like to recommend this album for its sleaze contents alone, but that only equates to about four, maybe five out of eleven tracks. It’s best to pick and choose which tracks you want to purchase for this album.”

We Are The Weekend (Official video)