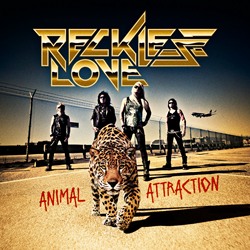 Reckless Love, the flamboyant Finnish rockers who burst spectacularly onto the UK scene in 2010, have unveiled the artwork for their upcoming album ‘Animal Attraction’. Reckless Love will release their second studio album on September 26th through Spinefarm Records.

Given the quartet’s recent successes both at home and abroad, including two appearances at last year’s Download Festival, a full headline tour of the UK, an appearance at Firefest in Nottingham, plus stellar reviews for their self-titled debut album (recently re-issued via Spinefarm in upgraded form), there is now much anticipation for the follow-up.

Already, ‘Hot’ – the first single/video from the album – is on release, complete with previously unreleased bonus track ‘Young & Crazy’, and the band are confident that ‘Animal Attraction’ will further enhance their reputation for melody-conscious hard rock with a smile on its face and a tinsel-coated turbo in its trousers.