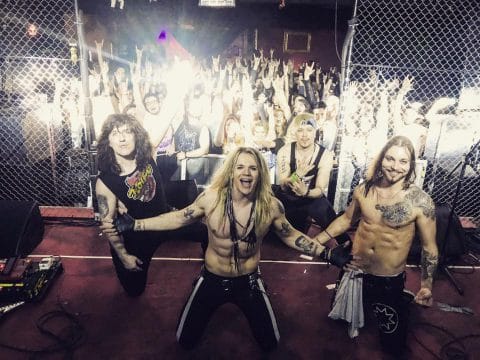 Maxx stated: “We are writing new songs for the next album as we speak. Plus we are making world wide deals with the best partners we can get so that the Reckless Love music can reach everyone.”

In terms of how Reckless Love got started and how he joined the band, Maxx advised (with slight edits): “Reckless Love for me started when I first met Olli. He saw me playing live with some of my friends. He told me that I would be perfect fit for their band (Reckless Love) at that time he was still singing in Crashdiet. After a while, he saw me playing again live with my friends and said the same thing again. At that moment I had no idea about the band. Then maybe 6 months later he called me and asked me to come and meet the band and maybe do some rehearsals or something. Soon, we met with Pepe and Olli and ended up having beer, eating pizza and talking about everything. It felt like we had known each others for years. Then they played some demos for me. I listened “One More Time”- demo for maybe 5-15 seconds and paused the iPod and said that I’m in. Then after 1 week the guys came in to my rehearsal place and we played together. It felt like a perfect match. Jalle proposed me and then we started rehearsing for the first show. After 2 weekends of practice. We went to the show. Kicked ass and signed a record deal with Universal Music Finland. The same spring we recorded our first album.”

You can read the rest of the interview with Reckless Love drummer Hessu Maxx at The New Wave of Hair Metal‘s Facebook page.

Sleaze Roxx stated the following in its review of InVader, which finished #16 on the Sleaze Roxx Readers’ Top 20 Albums of 2016: “I honestly don’t understand this album by Reckless Love. If they had laid heavy on ballads or mid-tempo rock songs, it would make sense from a mainstream sleaze rock point of view. But going from ’80s fueled sleaze to ’80s greased synth pop? All in eleven songs clocking in at roughly 45 minutes. The band talks in their press releases as doing homage to such legends as Alice Cooper and Mötley Crüe but also having distinctive parts that scream of the influence of such ’90s pop giants as Backstreet Boys or Britney Spears. Well ya, but to a single listener, they’re way off base. You can’t expect a Crüe banger to get on board with Britney Spears. Simple fact.”

Reckless Love‘s “We Are The Weekend” video:

RECKLESS LOVE “We are the weekend” (Official video)

Promotional video clip from RECKLESS LOVE for the song “We Are The Weekend” – taken from the album “InVader”.INVADER IS REALEASED via AOR HEAVEN.ORDER “INVAD…