Former Megadeth guitarist Glen Drover was recently interviewed by Jimmy Kay for Canada’s The Metal Voice and he spoke about working with Dave Mustaine on Megadeth‘s United Abominations album, which was released in 2007. 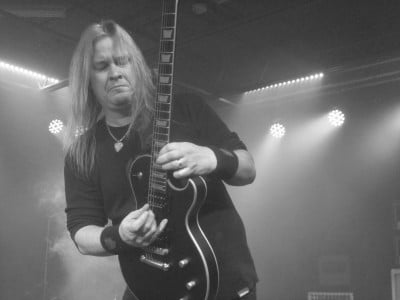 Drover advised (as transcribed by The Metal Voice with slight edits): “Dave, I got along with him really well, he wasn’t a taskmaster with me you know I always went in very very prepared.  I did my homework so much that he really didn’t question a whole lot. When it came to solos I would do something and then Dave would go why don’t you try something like this. Dave was  not singing all the notes in the solos he was just kind of  mimicked the actual the melodies and the flow of the tempo of the solo. That’s what it was like for me I can only speak for myself. I remember doing this one solo on the first song on the album called ‘Sleepwalker.’ That song wasn’t going to make the album thank god it did because it’s pretty much one of the very a few up-tempo tracks  because there were too many  mid-tempo songs  and we needed something that was going to be more of a fast.  But Dave didn’t want to do it. In the end what happened was me and Andy Sneap did a demo of it and send it for the record company [Roadrunner] and they said  yeah we’re using this one.  So I guess Dave was overpowered on that sorry Dave but that’s how the story went.”

In terms of what he thinks of the United Abominations album, Drover indicated: “I think it came out really well, it’s a very strong album, there are songs on there that I favour more than others of course but overall I think it’s a great album.  I also really enjoy the first three Megadeth, especially  So Far, So Good… So What! and Peace Sells… But Who’s Buying which are my favorite.”

You can listen to the interview with Glen Drover by Canada’s The Metal Voice below:

Megadeth performing “Sleepwalker” in San Diego, California, USA in or about 2009: