We will have to wait for one of Sleaze Roxx‘s most anticipated debut full-length albums a little longer as the recording for Irish rockers W.A.L.K.E.R. featuring lead vocalist Glen Walker and guitarist Kelan Hughes’ debut full-length record has been delayed due to the coronavirus pandemic. 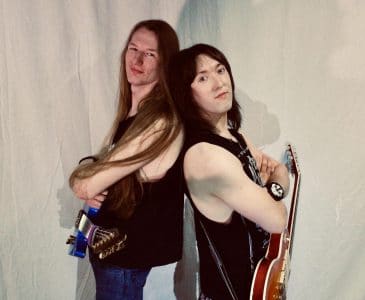 “Well it wouldn’t be a W.A.L.K.E.R. release without a massive delay in production. But at least this time it wasn’t our fault.

We’ve got half an album recorded so far and we’re looking forward to recording the next half when things get back to normal.

Stay strong, stay safe and until next time. We’ve been W.A.L.K.E.R. and you’ve been killer!”

W.A.L.K.E.R.‘s debut EP Bringing Rock Back finished at #4 on the Sleaze Roxx’s Top Ten Albums of 2019 to which Sleaze Roxx stated:

“W.A.L.K.E.R.’s two main men — frontman Glen Walker and lead guitarist Kelan Hughes — were not even close to being born in the ’80s and in Hughes‘ case, almost not even in the ’90s, but that hasn’t stopped the duo from coming up with arguably the most ’80s sounding album featured on the Sleaze Roxx’s Top Ten Albums of 2019. The Irish rockers were aiming to release an album with “all killer, no filler” and that’s exactly what they have done with their aptly titled EP Bringing Rock Back.

From the vintage Tesla sounding “Dreaming of You” to the riff laden title track to the party anthem “Time To Party”, W.A.L.K.E.R. deliver one great song after another on their five-song EP. The great news is that the group was recording its debut full-length album when I interviewed Walker and Hughes a few weeks ago and the new album will consist of brand new songs. As Walker pointed out to me, “We gave you a taste. Now you’re ready for the main course. If you like Bringing Rock Back, our upcoming album will blow you away.” I can’t wait for that to happen!”

The Official music video for Bringing Rock Back !#bringingrockbackThe new EP mixed by Michael WagenerYou can buy a copy of our new EP and merch herehttps://w…