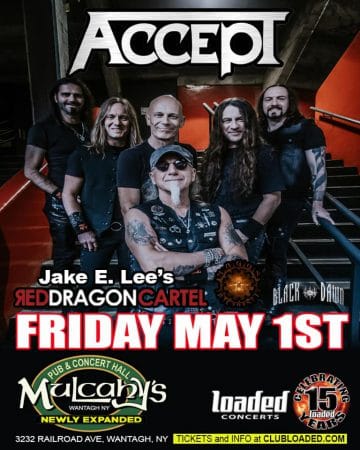 It appears that Red Dragon Cartel featuring former Ozzy Osbourne and Badlands guitarist Jake E. Lee will be playing some shows in 2020 as the group has just confirmed that it will be opening for Accept at Mulcahy’s Pub & Concert Hall in Wantagh, New York, USA on May 1, 2020.

The following message was posted on the band’s Facebook page earlier today with the accompanying poster:

Red Dragon Cartel have been very quiet since the end of March 2019 after drummer Phil Varone retired and less than six months after the release of their second studio album Patina.

Sleaze Roxx stated the following in its review of Red Dragon Cartel‘s tour stop in Toronto, Ontario, Canada back on March 16, 2019: “For those that complain that bands don’t change their setlist around from one tour to the other, such complaints simply cannot be bestowed upon Red Dragon Cartel. The band surprisingly only played two songs from its set at The Rockpile almost five years ago. The setlist this time around consisted of two songs from Red Dragon Cartel‘s self-titled debut album, a whopping eight tracks from the new record Patina, two Badlands songs, a drum solo and one Ozzy Osbourne song. As stated above, my main issue with the new songs from Patina is the lack of hook and melody to them. They are all more or less mid-tempo plodders. Aside from the terrific Badlands track “High Wire”, even the two other “covers” played on this night — 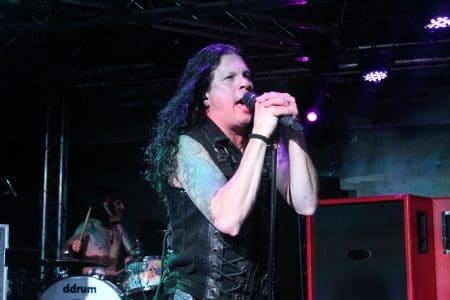 Badlands‘ “3 Day Funk” and Ozzy‘s “Spiders” — were also of the mid-tempo range. I can think of many Badlands songs (for example, “The Last Time”, Dreams In The Dark” and “Streets Cry Freedom”) and Jake E. Lee era Ozzy tracks (for example, “Slow Down”, “Never Know Why” and “Killer of Giants”) that I would have wanted to hear before those two. Out of the Patina material, my favorites were “Havana” and “Bitter.””

Sleaze Roxx concluded in its review: “I think the best way to sum Red Dragon Cartel‘s setlist and concert on this night is to compare it with their tour stop almost five years ago at the same venue. The second best song of the night (the closer “Feeder”) this time around was probably my second least favorite song of the night (after “War Machine”) back in 2014. Overall, I was quite disappointed with Red Dragon Cartel‘s setlist and will make sure to doublecheck their setlist before committing to go see them play live again.  Although I was hoping that I would get into the Patina album songs once I heard them in a live setting, that has turned out not to be the case.”