Red Dragon Cartel featuring guitarist Jake E. Lee are back in the studio working on their sophomore album.

The following message was posted on Red Dragon Cartel‘s Facebook page back on November 30, 2016: “We’re back in the studio working on our next album.” 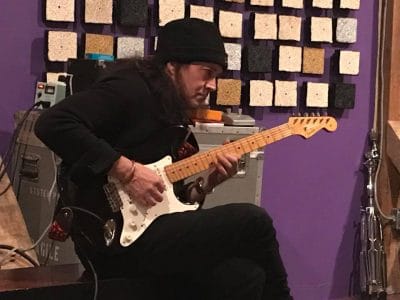 Red Dragon Cartel‘s debut self-titled album was released back on January 24, 2014 with singer Darren James Smith handling a good portion of the lead vocals. Sleaze Roxx stated in its review of the album Red Dragon Cartel: “Probably the best characteristic of this album is that it never repeats itself. There is an element of musical diversity, even within the metal genre, that is sorely lacking in many other current releases (Airbourne for example). The songs don’t sound like the one before or after, and even though this is heavy metal is it very diverse stylistically. I am sure having the guests on the release have something to do with that, but even songs that are from the core members are not repetitive. There is no formula or pretense here, just well done heavy metal that seems from a long ago age.”

A little more than a year later, Smith was later out of the band for about four and a half months before returning in August 2015.

Sleaze Roxx interviewed James upon his return to Red Dragon Cartel in August 2015. James was asked what his involvement would be with respect to a new album to which he replied, “Well, Jake just asked me if I would write it with him and Jonas as well so it is going to be a band effort. I haven’t heard anything yet as I have been away but I am hoping — I’ve got my fingers crossed — that it is going to be a little Badlandsish. I really love that stuff. Who knows? I mean, Jake is quite a creative guy so who knows what he is going to toss at us. Whatever it’s going to be, it’s going to be.”