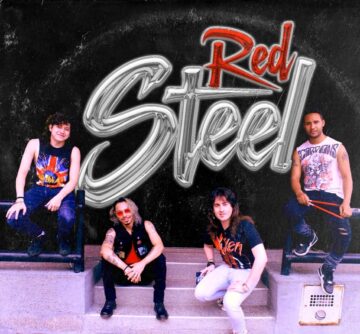 Speaking exclusively to Sleaze Roxx, Red Steel frontman Andy Steel explained how the band first began as he stated: “Red Steel was born from the rupture of a melodic metal band in 2009 in the city of Medellin and Antioquia in Colombia. Most of the musicians decided to create a glam rock band with the idea of ​​reviving the sound and shows of the time of the ’80s.”

In terms of the rock n’ roll scene in Medellin, Colombia, Steel indicated: “Medellin has always been a city of world renowned for its metal bands. At the moment, there is a large movement of bands. Every day, there is more to see and hear. I think it is great for us, because we do not see the scene lost, in terms of music movement and shows.”

With respect to releasing music without lyrics in English, Steel noted: “In the album that we are about to finish, there are two songs in English that are quite moving. We also do it to take the band globally since the genre deserves it. We do it more for pleasure and to reach the closest countries first.”

In regard to Red Steel‘s future plans, Steel stated: “Well, after this first release, we are working on the second and third videos, one in comic version. and then hopefully this year to release the complete album and with this a show for its official launch.”