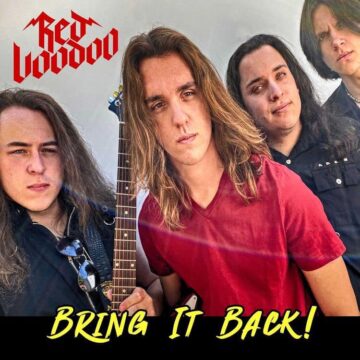 “Sacramento’s rock band Red Voodoo are ready to take on the world with their debut single, “Rise Up!” produced by TESLA guitarist Frank Hannon. Influenced by the upbeat, party rock n roll of the 80’s (yet mixed with a refreshing soulful sound) and comprised of members Dino McCord (lead vocals, rhythm guitar), Davin Loiler (guitar), Andrew Edwards (bass), and Nick Pesely (drums), the group is also working on a full-length debut album – also under the guidance of Frank Hannon Productions, the new artist development label currently working with a few select new up and coming young artists at frankhannonproductions.com.

Formed in 2018, Red Voodoo features the lead vocal skills of 17 year old Dino (who is influenced by Sam Cooke, Mark Farner of Grand Funk, and Otis Redding thus bringing a very unusual vocal ability to a band of this age group), the band places a huge emphasis on quality vocals. This is also heard in the harmony backing vocals of Davin and Andrew to enhance the band’s sound. Nick’s drumming however leans more to the progressive influences of Neil Peart, and this brings a colorful melodic tom tom approach to his drumming which is also a rarity in today’s music.

Red Voodoo‘s “Bring It Back” single: