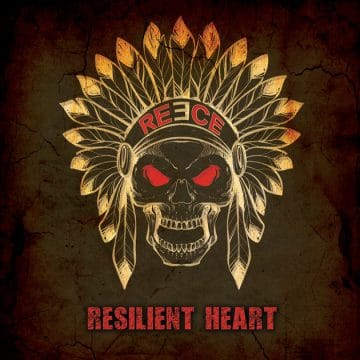 Reece featuring former Accept lead vocalist David Reece have released a video for their song “Two Coins And A Dead Man” from the album Resilient Heart, which was released earlier this year via Mighty Music.

“I wanted to create something different with this video. Back to more of a short movie type of thing. Being it was one of the first songs written for the album I’ve always felt it’s needed to be seen visually along with the sonics. Valerio Fea was the director. I found him through Fiorella Scatena who’s Andrea Vergori, our keyboard player’s love. Valerio was great capturing my vision for the song in my head. The original model flaked on day of shooting so I made my first choice who was my lovely wife Nadia to step in (hopefully I’m safe with her and Knives now?). Lena Angioni added her talents with Malte Frederik Burkert, Martin Jepsen Andersen and Marco Angioni in the black and white footage. I’m very pleased with the songs response it seems to be a fan and media favorite so enjoy people and stay Resilient!”

Reece – “Two Coins And A Dead Man” is taken from the album “Resilient Heart” by Reece. Director: Valerio FeaBlack and white footage: Lena AngioniOut through …