Wu was asked what was the turning point for Heavens Edge where the band began gardening interest from record labels. Wu replied: “We were like, “Okay, we’ve taken it as far as we can,” and we signed with Golden Guru Management. And at that time, they were the big booking agents in the area. Their pitch to us was, “You sign with us, you’re gonna get the cherry gigs.” 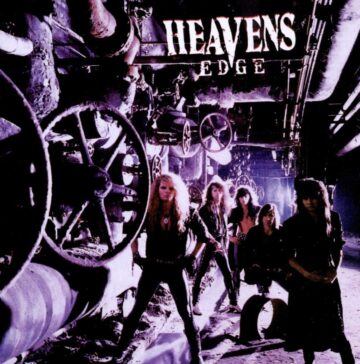 Cherry gig meaning, we’ll be headlining The Trocadero. And we were like, “That sounds good! Let’s do the cherry gigs!” So, we signed with Golden Guru, and that’s when the momentum really started picking up. They took over shopping us to labels, and there was an industry magazine called The Hard Report, based out of here in South Jersey. Bill Hard was the writer for it, and he wrote something about Heavens Edge being, “The next Bon Jovi out of this area.” Right away, the records companies started calling.

We started doing record company showcases, and the pivotal night was when we were at The Troc. We invited seven labels, and our management was like, “Guys, don’t get your hopes up. We’re lucky if the secretary from one of them comes.” Right before we’re about to go on stage, our manager knocks on the door and says, “All seven labels are here.” And we’re like, “Holy cow!” We went out there and had a killer show, and backstage that night was like a dream come true for any musician. We got verbal offers from all seven. They all know each other, and they were all teasing each other, “We got this band!” … “No, they’re comin’ with us!” They’re all busting each other’s chops. Out of the seven labels, we chose Columbia, and boy, did we make the wrong choice. [Laughs].”

DiCecco mentioned that singer Mark Evans‘ choice of the encore “Just another Fire” made the hair stand up on his arms to which Wu noted: “Oh my God; it was spectacular. So, we had written a new song called, “Just Another Fire,” and Mark’s just like, “For the encore, let’s go do ‘Just Another Fire.’” And I’m like, “But we’ve never done it before! That’s insane!” We went out — and it’s just an acoustic song, which is odd for an encore song — and it just bowls over the crowd and the record companies, I guess. It was a magical, magical night that I’ll never forget; it was almost a blur. I just remember being backstage in the little dressing room, and these major people from record companies ganging up on us because they all wanted us on their label. Spectacular.

You can read the rest of the interview with Reggie Wu at Vinyl Writer Music‘s website.