Good news to report as Quiet Riot drummer Frankie Banali is reportedly not on his death bed despite being admitted presumably yesterday to the emergency ward of the Kaiser Permanente Woodland Medical Center in Los Angeles, California, USA. 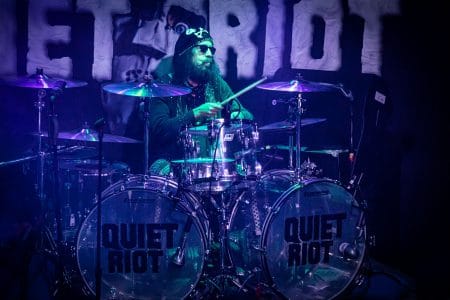 Back on October 21, 2019, Banali revealed that he had been diagnosed with stage four pancreatic cancer.  The drummer was given six months to live. Yesterday, Banali posted messages on his Facebook account indicating that he loved his long-time Quiet Riot bandmates Chuck Wright (bass) and Alex Grossi (guitar). Apparently, Banali didn’t want to leave his current lead vocalist Jizzy Pearl (who also handled lead vocals for Quiet Riot from 2014 to 2016) left out as he posted a similar message earlier today in regard to Pearl.

“Frankie is not on his death bed. He has been in the ER several times during this journey. He currently has an infection, again. That will get cleared up and he will come home. Thank you all. You can keep up the prayers and good thoughts for him as he is fighting a tough battle.”

“THIS IS FROM THE LADY IN THE KNOW. I HAVE AN INFECTION THAT NEEDS TO BE DEALT WITH ALONG WITH SEVERAL PROCEDURES THAT NEED TO BE ADDRESSED. HOPEFULLY THIS “DISNEYLAND” VISIT WILL NOT BE TOO LONG AND I CAN RETURN HOME TO MAKE MY GREEN TEA… DO MY FLOWER ARRANGEMENTS, WORK ON MY ART AND GET INTO MY USUAL HOME QUARENTINE TROUBLE…. MY SINCERE THANKS TO EVERYONE FOR THEIR LOVE, WELL WISHES, PRAYERS AND CONCERN! I KNOW YOU ALL ROCK…. BUT YOU ALREADY KNEW THAT!” 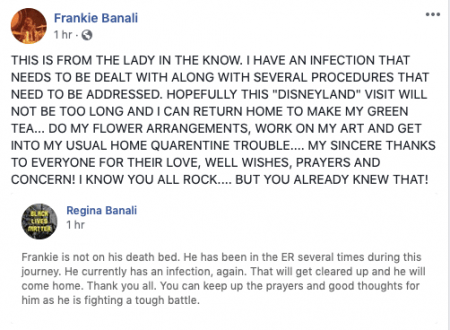 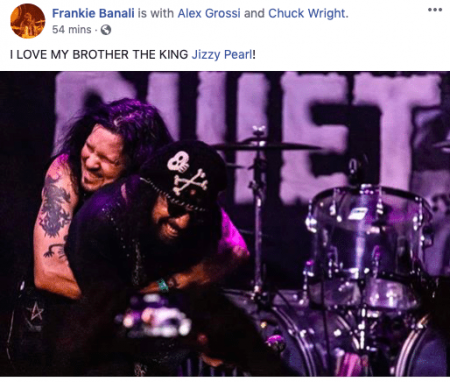