The latest all-star group consisting of guitarist Craig Goldy, singer Chas West, drummer Vinny Appice and bassist Sean McNabb — and known as Resurrection Kings — have released another song (“Path Of Love”) from their self-titled debut album which will be released on January 29, 2016. 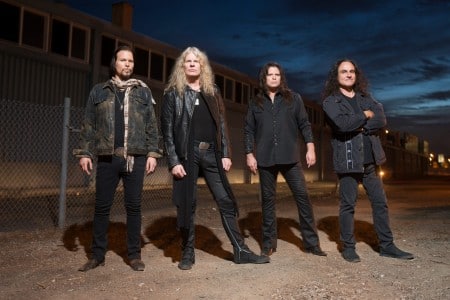 “Path Of Love” is the third song released by Resurrection Kings after “Who Did You Run To” and “Distant Prayer.”

Sleaze Roxx stated the following in its review of Resurrection Kings: “All the songs are well executed — as they should be with such an all-star cast of musicians — and enjoyable to listen to but I don’t pine to play the album over and over like other releases. My favorite tracks are the harder edged material such as the opening track, “Livin’ Out Loud” (which was the Goldy demo that impressed Frontiers Records president Perugino), “Path Of Love” with its cool guitar riff/groove, and the single “Who Do You Run To.” At the end of the day, Resurrection Kings‘ self-titled debut album is a good but not great record that I enjoy a little bit more each time that I listen to it and which definitely deserves a few spins to get used to West‘s vocal delivery over the sometimes Dio styled guitar riffs.”

Goldy was recently interviewed by Sleaze Roxx in what turned out to be a two-part interview (see Part 1 and Part 2). During the interview, Goldy spoke about how Resurrection Kings came to be as he stated, “Resurrection Kings was formed through an e-mail from the president of Frontiers. He asked if I was interested in being part of a band with other musicians that had built a name for themselves in the ’80s. The band was to be in a Whitesnake or Deep Purple vein. The people who they had approached to be a part of the band fell through so I asked Chas [West] who I had written a few songs with and the songs were going to be on the album. It made perfect sense that the guy that wrote the songs would be singing the songs. “Living Out Loud” is a special song to me because Chas and I put a lot of work into that song. Sean [McNabb] came on board next. I love his work and I saw Chas and Sean play some Led Zeppelin covers a few years back. I was absolutely floored by how good those two guys were. I was doing some recording sessions with Vinny and I played him some of the songs. He liked what he heard and he joined up.”