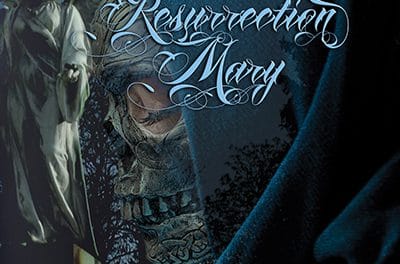 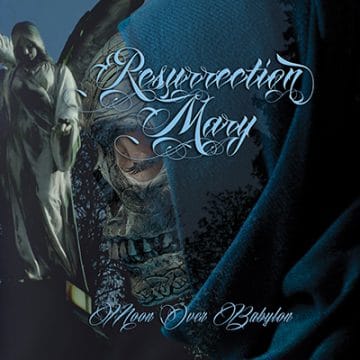 “Moon Over Babylon, the album that almost didn’t happen, is finally upon us with great delight to Resurrection Mary and die-hard cult fans who have been calling for a release of the band’s material for ages. Resurrection Mary were so liked in La La Land that they were given opening slots for many of the notable bands that came through town including gigs with Love/Hate, Junkyard, Badlands, Bang Tango, and L.A Guns.

Resurrection Mary came out of Hollywood in the early to mid ’90s. They were formed by former 151 Swing lead guitarist Vince Flores and lead singer Eddie Robison (Alleycat Scratch) who found one another through classified ads in a local music rag. Three more members from other local Hollywood bands would round out the line-up. The band decided on a name out of a book of a real life haunting called The Haunted Heartland, where they found a story of a famous Chicago ghost named Mary who was buried in Resurrection Cemetery after being killed while leaving a local dance hall. She is rumored to still make appearances at clubs, bars and hitchhiking on dark roads near the cemetery.

After a gig at the Whisky, the boys met their financial backer and quickly went into two of the top recording studios in LA, Music Grinder and Westlake Studios, with their new producer Tracii Guns, lead guitar player of LA Guns. Tracii secured Micaja Ryan (Appetite for Destruction) to engineer the five song demo which led to the band being represented by powerhouse attorney David Rudich (Mötley Crüe, KISS). The push for a major record deal culminated with a private showcase at LA’s Leads Studios for several high-profile A&R reps and with a trip to New York City with LA Guns to meet their label people at the kick off for the Hollywood Vampires tour at the Limelight in NYC. As is often heard, creative differences got in the way and the rest is history.

Over the years, the five song demo of the tracks with Tracii Guns have gone missing and in fact, the band only had three of their own tracks. Thanks to friends, FnA Records was able to corral a total of 10 demo tracks (thank you to Delbert for five tracks, Jordan for three tracks, and Patrick for the remaining two tracks). It was a real team effort. The music now lives on with a 10 song record entitled Moon Over Babylon, released through FnA Records.”

You can order Resurrection Mary‘s album Moon Over Babylon via FnA Records‘ website.