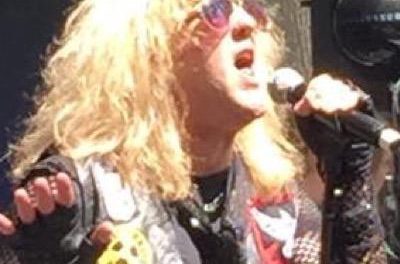 Long-time Sleaze Roxx contributor Ruben Mosqueda interviewed Black ‘N Blue‘s frontman Jaime St. James for Oregon Music News back in March 2011 just before the release of the group’s last studio album Hell Yeah! The interview is no longer available on Oregon Music News but most of it is being reproduced as a retro interview on Sleaze Roxx. In the interview, St. James talks about his time in Warrant, the “new” Hell Yeah! album without Tommy Thayer participating and Gene Simmons‘ past involvement with Black ‘N Blue during their early days.

Oregon Music News: Black ‘N Blue is up and running once again. You’re releasing a new album, Hell Yeah!, on Frontiers in May. Can you clarify one thing — were you still part of Black ‘N Blue during your time in Warrant? The reason I ask is that Black ‘N Blue has made the rounds in the American festival circuit. 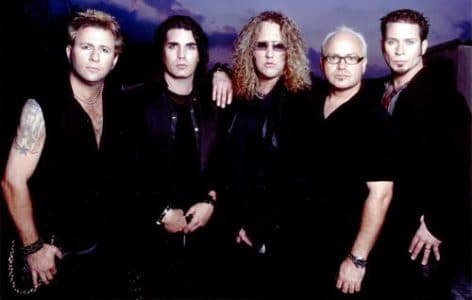 Jaime St. James: I know exactly what you’re talking about. I got signed to a solo deal in England. I called Jeff “Woop” Warner [Black ‘N Blue guitarist] and asked, “Why don’t we make this a Black ‘N Blue record? You have the studio. I have the record deal.” He said, “Yeah, why don’t we do this?” That was around 2003, I think. I went to Portland from L.A. and we went to work on the album. Shortly after that, I got the call from Warrant. They needed a singer. So I thought “You know. I love playing live and I’m working on this Black ‘N Blue record. Let’s see if we can do both.” Little did I know that Warrant was touring as extensively as they were. It seemed like I was flying out to shows weekly. That put a damper on what was supposed to be the Black ‘N Blue record. Basically, Black ‘N Blue got back together in 2003 when [singer] Jani Lane rejoined Warrant. I was out of that band and I could then focus on the next Black ‘N Blue album. It all didn’t have to do with me. Jeff Warner lost his studio. We had to find another studio, and they live in Portland and I live in L.A. It’s finally done and thank God [laughs]!

Oregon Music News: One more thing on your time in Warrant. How comfortable were you performing the bulk of a set that you didn’t have a hand in writing?

Jaime St. James: The first show that I did with Warrant was in Daytona Beach, Florida. We were opening for Night Ranger. I remember at that time I had rehearsed with them about four times and had to learn 20 songs. I was about to go on stage and I was freaking out! I thought, “These people are going to hate me. I’m not Jani [Lane]. I’m not that guy.” I remember I was on the side of the stage and Jack Blades [bassist from Night Ranger] came up to me and saw that I was visibly nervous and started rubbing my shoulders. He said, “Jaime, it’s okay. Just got out there and be yourself. Go out there, be yourself and you’ll be fine.” That was so sweet and meant a lot coming from him since Black ‘N Blue toured with Jack and Night Ranger years ago. The first show was scary but three to four songs in, I got comfortable and I was their singer for four years. Their audience was accepting of me. Listen, when someone comes in to replace an original singer, there are people who aren’t going to like him. That’s just a fact. I felt welcomed not only by the band but by the fans. Having said that, I’m very happy to be the singer for Black ‘N Blue because that is who I am. 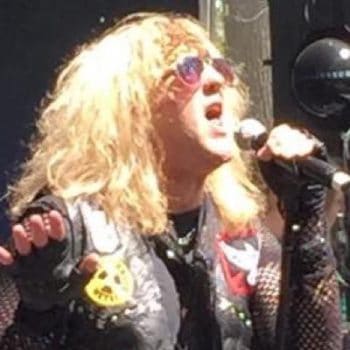 Oregon Music News: So by the time you left Warrant and started to get the rest of the guys on board for a new album, Tommy Thayer was already playing in KISS.

Jaime St. James: Tommy was employed by KISS and then he was asked to be their guitarist. I’ve been friends with Tommy Thayer since I was 17 years old. I knew what he was doing and I knew he couldn’t be involved. We found [guitarist] Shawn Sonnenschein and he’s great. I’m proud of Tommy. He’s got a great gig and he does a great job. We knew that he wouldn’t be involved. I think the fact that we have four out of five guys for a band that’s been around for 30 years isn’t bad.

Oregon Music News: I know you and Tommy go way back, and you have great respect for one another. That didn’t make it any easier, right?

Jaime St. James: You’re right, yes. I formed Black ‘N Blue with Tommy Thayer. We formed this band. It’s strange not having him around. I played him the demos and rough mixes of the album and he said, “You guys are doing great. You don’t need me. You’ll be alright.” To be honest with you, the Black ‘N Blue sound is five guys, even though Tommy and I wrote the bulk of the material. It’s five guys that make the sound. If Patrick Young wasn’t on bass, it wouldn’t sound like Black ‘N Blue to me. There’s just so much that needs to be said about the players and I really do think that is why this album sounds like Black ‘N Blue right off the bat. I think we picked right up where we left off in 1988. To be honest with you, I had my doubts that it wouldn’t sound that way, but it really does and I’m pleased. 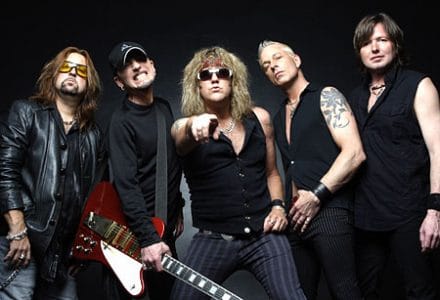 Oregon Music News: Black ‘N Blue was inducted into the Oregon Music Hall of Fame in October of 2010. Tommy Thayer even made it in for the occasion. That must have been a huge honor for you guys.

Jaime St. James: Yeah, he did. Tommy plays with us every now and then. He has to get clearance from KISS but this was one event that he just couldn’t miss. I didn’t really know what this was all about. I flew in from L.A. for the event. This was different than a performance, because when you’re performing, you step out and you sing the song. This blew my mind because I stepped out and I was there with the band to accept an award. There was applause, there were cheers and everyone was standing there in front of us! The Roseland was packed. The whole thing was just surreal to me. I can say that was one of the happiest nights of my life. I’ve never felt so much love from Portland. I always felt like we [Black ‘N Blue] were the bastard children of Portland. We didn’t play many covers when we started out. We wanted to play our original tunes and therefore we didn’t play as many clubs. I felt like we didn’t get the respect that we’d deserved, so it was very gratifying when we got into the Oregon Music Hall of Fame.

Oregon Music News: Hell Yeah! is the new album and the first from Black ‘N Blue since 1988’s In Heat. Is it composed of all new material or is it stuff that you were holding onto from previous writing sessions?

Jaime St. James: No old songs — these songs date back from about 2003 to the present day. We didn’t rehash old song ideas. It’s all new fresh songs written by myself and Jeff “Woop” Warner with some riffs from Shawn here and there. I say new but how new is it when we started eight years ago? 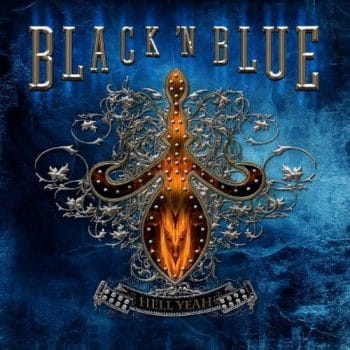 Oregon Music News: How was this particular writing experience different from the past? I ask this because the main writers have been you and Tommy Thayer.

Jaime St. James: I write a lot of the music for this band. I play guitar, not great but enough to write a song. I’m not a good guitarist. Anyone can tell you that, but I can write. I did write a lot; you’re right. Tommy and I were the Lennon and McCartney of Black ‘N Blue. Jeff also wrote a lot for the band on past albums. On the new record, it was Jeff and I that wrote the songs. In fact, one of my favorite songs on the new album is called “Target.” I didn’t write it; he did. We all know what the Black ‘N Blue sound is. When Jeff and I wrote for this album, we found that we just couldn’t sound any other way. It’s Black ‘N Blue. In fact, I played the record for Tommy Thayer and he said, “Jesus this sounds like a Black ‘N Blue record.” Each album we did was slightly different than the last. It‘s because we were influenced by different bands from AC/DC to Cheap Trick to The Beatles. It‘s in there. The new album ‘Hell Yeah!’ is different than the albums that came before. It’s heavier but it’s still Black ‘N Blue.

Oregon Music News: Sounds like you got Tommy’s blessing.

Jaime St. James: We did get his blessing. I was scared at first because I didn’t know how we were going to do this without Tommy because he was such a huge part of Black ‘N Blue. Would it be better if he were on here? Probably, but it is what it is and I happen to think that this album is awesome. I can’t believe how great it sounds and I’m so proud of it 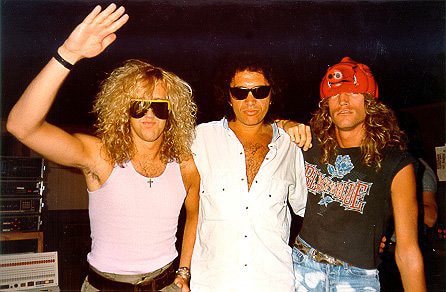 Oregon Music News: What was it like having Gene Simmons in your corner? He took Black ‘N Blue under his wing and helped with production and helped co-write some songs throughout your career.

Jaime St. James: He was great. Gene is a complete workaholic. He works hard and is an amazing person. I remember we were in rehearsal space and he was sitting there listening to the songs and would give feedback. I remember him saying to me: “Listen, don’t sing about someone else; sing about yourself.” He did influence us a lot but at the end of the day, we were Black ‘N Blue and we would do what we wanted. Gene had a lot to offer and he was brilliant. I have so much respect for the guy….