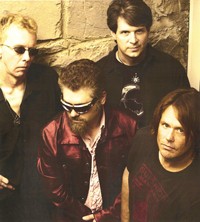 Nashville’s rock and roll veterans, Royal Court Of China, will be performing this Labor Day, Monday, September 5th, as part of the iconic music venue Exit/In’s 40th Anniversary Celebration. The Nashville nightclub is hosting a week of shows to celebrate their anniversary and also to raise money for MusiCares, a non-profit arm of the National Academy of Recording Sciences (NARAS), which assists musicians and their families in need.

“We were extremely honored to be asked to perform at such a cool event and for a good cause,” said singer Joe Blanton, “and luckily the stars aligned and we were able to play on opening night to kick-off the festivities.” Also on the bill are Nashville music legends Jimmy Hall and Lee Roy Parnell.

The Royal Court of China, formed in Nashville in 1986 by Blanton and drummer Chris Mekow, recorded and toured until the mid-90s releasing one independent and two major label albums, and were included on several film soundtracks and compilations before calling it a day. They regrouped in 2006 for their 20th anniversary and have been playing and recording ever since. Blanton and Mekow will be joined by long time RCC bassist Drew Cornutt and lead guitarist extraordinaire, Warner Hodges of Jason and the Scorchers for the performance. “Unfortunately, guitarist Jeff Mays, couldn’t be in town on the 5th but thankfully Warner said he’d play with us to help celebrate the Exit/In and raise some money for MusiCares,” said Mekow, “plus, we hope to coax a couple other friends to get on stage that night too.”

Doors will be at 7:00 pm that night and show is ages 18 and over. Ticket information and the full line-up of artists is available at the Exit/In website, www.exitin.com or by calling the club at 615-321-3340. For more information and updates on the Royal Court of China go to www.facebook.com/TheRCC.