Reverse Grip to play first gig in more than a year

Canadian sleaze rockers, Reverse Grip, have announced their first show in more than a year. The band comprised of the three Broda brothers — Dru (lead vocals), Sean (guitar) and Dylan (drums) — along with bassist Kramer White will be headlining a gig at Cherry Cola’s in Toronto, Canada on February 18, 2016. 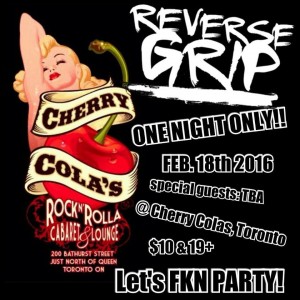 Reverse Grip have released two albums to date — their debut EP Nasty Reputation in 2011 and their full-length album Hunger For Chaos in 2012. The sleaze rockers toured all over the world in 2012 and 2013 including Brasil, Australia, Japan and Europe.

Speaking exclusively with Sleaze Roxx, Reverse Grip‘s frontman Dru Broda explained the band’s absence in more than a year and advised of the group’s status going forward: “Well we’ve had a lot of time off, some different ideas as to where we wanted to be at this point and what we wanted to do. Dylan went to Finland and is also playing in a cool band called Snow White’s Poison Bite, so that also made it hard to get things restarted. With him gone, replacing a key member of a band that in our opinion gives us our sound, was extremely difficult. More so than we originally thought. It just didn’t feel the same without him back there. To us, he’s more than Reverse Grip‘s drummer. He was our leader and our older brother. So we all decided it best to just take a break and do some different things. Kramer has been working on a new project and trying to get it polished up and ready to unleash on the world. Myself and Sean have been experimenting with new stuff.

What we are hoping to do is to lay down a new demo when Dylan‘s back in town. It will be really interesting to see how all the songs mesh together since everyone has been away and we have picked up new tastes and different sounds. The one thing that we all still have in common is our passion to get back on a stage and have fun with the fans! If you wanna check out some of our new tunes, we will be rockin them at Cherry Cola’s in Toronto on February 18th! Come on out! The first 20 people will be getting a late Christmas gift from RG!”

Reverse Grip is bringing you a short video, portraying a young woman’s troubling struggle with her life. As we all watch her slowly fade into the dark gutter…