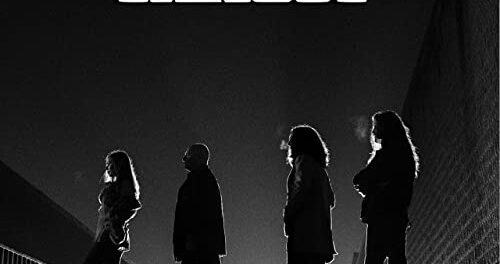 As stated in a previous article back in 2017, Sleaze Roxx doesn’t generally review individual singles, but sometimes the exception can be made. Toronto, Ontario, Canada based rockers, Thrust, have recently released a very catchy song entitled simply “Skip”, which can be termed as Psychedelic Hard Rock?

As I sat down to watch the video of the song, it became very apparent to me that this band of young musicians is very talented and knows how to write a killer hook. I think it is very important for a young band to formulate and calculate its sound and image appropriately. Let’s be honest, you never get a second chance to make a first impression. I do not care what anybody says, in music there has to be a demographic of the audience you are trying to appeal to. Your sound and image is geared towards that 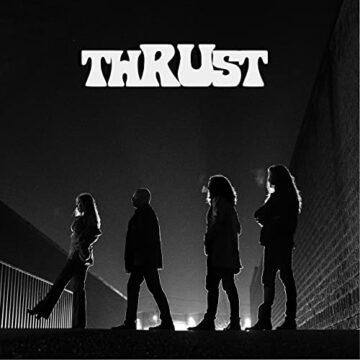 demographic. Nobody wants to see a bunch middle-aged, overweight musicians wearing spandex and make-up playing hair rock. Case in point, this could be why Vince Neil, over the years, has taken so much flack for what he has become unfortunately.

In terms of the song itself, I love the phrasing in the chorus — “There’s a skip – in my heart and it starts when the lights go down!” I actually wasn’t sure how the title “Skip” was going to make any sense. Sometimes, you see a song title and wonder immediately how it will be put into the vocal and the melody. This was actually a very clever way of doing it. As I mentioned that phrasing, with the hesitation, really makes it work. We can all appreciate a song when a band takes the time to be clever and interesting whether you are a fan of the music itself. If I hear something that captures me, I will easily pay a compliment. It’s when a band has total disarray for being clever and forgetting that melody is a huge part of what appeals to the human ear. That could be why I get snotty and agitated. Then I begin to argue all the points why I feel that artist or band is total crap. But that’s something that is here nor there when speaking of “Skip.” I got derailed there slightly for a second as sometimes my convictions about shitty bands and artists can consume me.

Now let’s talk about the appearance of the band. It becomes immediately apparent that vocalist Regina Myers really does a great job of instantly catching your attention. It could be a throw off that Myers in the video is wearing a very interesting pair of goggles, but regardless that does not taken away from the appeal of the female vocalist and those goggles showcase the basis of the song’s perception. Now take that with a grain of salt. No sexist remarks from this guy because frankly I think those days are far behind us. The vocals are bold and clear. I hear a Grace Slick / Jefferson Airplane vibe within the vocal stylings. There is a certain swagger as well that Myers really exemplifies perfectly. Does the term ‘instant charisma’ make sense? If you’re going to be the lead vocalist, it is very important that you possess that quality or your audience will see through that and move on to the next band.

In terms of the instrumental part of the band, the bass line of Paul Mathur and drumming of James Nolan really add to this certain nostalgia as well. Guitarist Mitch Davey comes across as very schooled and the guitarist exposes a very nice distinction to what works in a song and what does not.

I am not sure about the references to pills and drugs in the video, but I think that is part of the mystique of the song and follows what the vocals are saying. It gives you that feeling of being back in the ’60s and enjoying all the freedoms of the world at the time. I wasn’t totally sold on the video itself at first, but as I watched it a few more times, I came to the conclusion that it really conveys the song in an appropriate manner. Sometimes, things are supposed to make you uncomfortable to get the point across. As being someone who doesn’t partake in any kind extra-curricular drug use, I had to somewhat open my mind to the fact that this was very prevalent at the time that this video is possibly emulating.

Overall, this song is exciting, and fresh, but also offers an element of the past. Would I term it as old school hair metal? Possibly not, but I wouldn’t call it jazz either. It’s somewhere in the psychedelic realm of music. In some ways, the ’60s were always an era in music that kind of freaked me out, but with that said, I watch horror movies for that very fact, so as I have gotten older I have become a little more tolerant of the era over the years. By no means am I just tolerant of this song. It’s the era that I make the comparison too. I think this song is brilliant. I highly recommend checking out this very talented group of young musicians. I see very exciting things happening for Thrust in the near future.