Sleaze Roxx does not usually review individual songs but an exception will be made for Scavenger‘s new two track single “Backslider” / “Red Hot.” 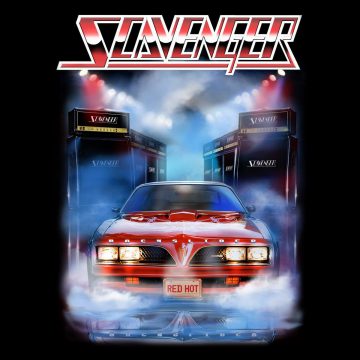 Review:
Over 30 years after disbanding due to the demise of their label just as debut album Battlefields was landing within ear distance of metal fans, a chance encounter between original members prompted the unexpected return of Scavenger, a blistering metal quintet out of Belgium. Charging back in 2018 with a new line-up enhanced by energized younger musicians and a powerhouse female vocalist, Scavenger not only made their 1985 debut full length record available to the metal masses again, but displayed their new line-up through scores of aggressive performances at concerts and festivals. Now with developed precision and enthusiasm, Scavenger take the next step by offering the first fresh morsels of recorded music in over three decades with their new two-tune metal single release.

It should be noted that since Scavenger‘s return a couple years back, the band has morphed from a group featuring original members Luke Ebinger and Marc Herremans flanked by three new members including guitarist Kevin Demesmaeker and singer Tina Callebaut into a band currently featuring only Desmaeker and Callebaut and additional new bandmates rolling forward still under the Scavenger banner. Basically speaking, Scavenger 2020 is a whole new beast that includes no members of the band that originally released that 1985 debut on Mausoleum Records. Unless you’re just a diehard Scavenger fan that refuses to put up with no less than something featuring original band members, this release by the 2020 version is metal worthy of carrying on the Scavenger name. Besides, it’s just a couple tunes for just a few bucks so hardly anything that you’ll go broke giving a chance. Even so, after finding out so many interesting facts, I took the approach that I should first check out the original 1985 album but after a pretty intense “Holy crap! This band shoulda been huge!” moment, I decided that aside from stylistic comparison, maybe I should look at Scavenger more as a new band releasing their first few tunes as opposed to a band returning to the scene with its first new music in over 30 years.

With only two songs to pull in new fans and at the same time, try to convince the naysayers, Scavenger version 2020 had to have been thinking that they had zero choice but to come out swinging. After all, living up to a once promising name and fanbase with a completely new line-up and a female singer instead of another powerhouse dude up front is more than just a tad bit of change. Hell, the only way they could have been more different would have involved a whole new name and style but after hearing bits and pieces of Battlefields, I gotta say, not only do the new tunes rock balls, I might even actually dig Scavenger 2020 better. Yeah, I understand how original fans might feel. If any of my fave bands came back with all new members, I’d more than likely tell them to piss off too but seeing as I’ve only just heard about Scavenger this week, I’m fine with this Scavenger. Don’t get me wrong, I totally am digging on that 1985 release too but as far as my ears are concerned, they’re just getting rocked by two different bands.

Out of the gate, “Backslider” is a driving hard rocker of a tune with killer dual guitars and some pretty smoking hot lead vocals. The chorus has those aggressive chant gang vocals that fans fighting for position in the front row with arms raised would totally get into and the guitar solos pleasantly rip without being too over the top. Think tastefully Judas Priest tandem lead guitar heavy metal. Perfect for a fan of old Priest like myself.

Second track “Red Hot” starts off with a gorgeous melodic metal intro before tearing in with great lead guitar which I have to say is the main high point of the track from start to finish. On a first listen, the best comparison I can make is the heavier classic side of Dokken. Scavenger even deliver a Dokken style break a little past the midway point followed by great building lead that erupts into all out solo fury. While it does have a simple gang chant chorus like “Backslider”, the second track does include a tad more melodic seasoning. I’m not sure if the band released this in classic single fashion with “Backslider” being the single and “Red Hot” the b-side but as much as I really like both, the latter is by far the cooler and more superior track if anything for the great guitar licks that just shoot in and out very effectively. It’s a very cool updated take on old school metal.

Now I’m not sure how deep this whole “no original band members” thing is or even how much it matters to metal fans in general or even any of Scavenger’s old fans, but what I do know is that this new release is two songs of really great classic melodic metal. Seriously, I could put this on in my car and end up with a speeding ticket. It’s at least that much of a hard rock blast. Well worth the little coin the band is charging for it and if you’re just too intent on not buying into anything less than the original band, my last word on it will have to be, why be a backslider when you can just rock out to this one too? Trust me man, it’s pretty red hot.