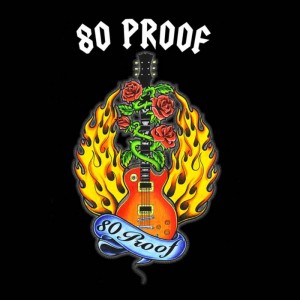 Review:
Reviewing an album that was released almost ten years ago from a long ago defunct band seems kind of redundant but one listen to 80Proof‘s debut EP confirmed that this is a sleazy musical offering that is worth checking out and which still holds up quite well almost a decade later.

80Proof is the first hard rock band that lead guitarist Siggy Signal was a part of once he got to Christchurch, New Zealand. Having myself visited that city — which is all the way just about on the other side of the world from Canada — just a year prior to the release of the 80Proof EP, I never imagined that there would be any kind of sleaze rock scene in that city but I am obviously being proven wrong with 80Proof. The music on 80Proof is straightforward and uncomplicated but immediately draws me in from the first few notes of opening track “Unzipped And Lethal.” The drums are front and centre on this opening track and the guitar riffs and solos are solid, simple and enjoyable. Singer Mark E. Harlot will never win a singer of the year award but his sleazy delivery works well on all the EP’s three tracks.

The songs do feel a little bit on the short side except for “Mean Streak” which clocks in at just over four minutes. The latter is my favourite song on the 80Proof EP with its cool extended guitar solo and a sleazy down n’ dirty guitar riff on which the whole track is based on. To me, “Mean Streak” highlights everything that is great about sleaze type rock. The 80Proof EP closes off with a speedy rendition of the catchy and straightforward “We Like Rock” which lyrics will not propel 80Proof to any literary achievements of any kind.

It’s a shame that 80Proof are no longer because the sleaze group’s three song self-titled EP is a strong debut album and showed a lot of what turns out to be untapped potential. The good news is that 80Proof‘s debut EP is available for free streaming on Signal‘s Bandcamp page.