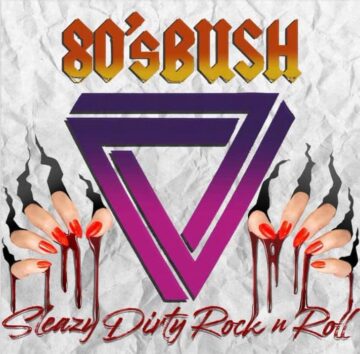 Review:
The old adage of never judge a book by its cover certainly applies to my initial views of 80’s Bush. Over the last few years, there seems to have been an influx of bands taking the over the top ’80s style and look to new heights. I suppose that Steel Panther have not helped in that regard since they are now of the only heavily ’80s influenced bands in the last 20 years to have broken through and who are able to headline theatre like venues throughout the United States of America and Canada on a consistent basis. The big difference between Steel Panther and many of the other ’80s wannabe bands is that the former has some fantastic songs and if you’re going to have a long lasting music career, eventually you’re going to have to produce some memorable songs to do so. You can of course easily ride those memorable songs for a couple of decades as many bands from the ’80s have shown but you still need those great songs in the first place to get to that point.

My first impression of 80’s Bush was “Here we go again. Another band using the ’80 schtick in an over the top manner.” Although I did end up posting two articles on Sleaze Roxx relating to 80’s Bush‘s two videos (for the singles “Mystery’s Wild” and “Sleazy Dirty Rock n Roll”), it wasn’t until the group’s presumably debut EP make its way to the Sleaze Roxx headquarters that I really “listened” to the band. I have to say that I was pleasantly surprised with what I heard. The opening track “Sleazy Dirty Rock n Roll” is probably the weakest song on the EP so it’s quite surprising to me to see it as the first song. Nevertheless, it’s an enjoyable track and worth listening to in any case. “Mystery’s Wild” sounds like a tune that Poison would have come up with in their heyday. The song is catchy, upbeat, simple and easy to sing along to, and boasts an easy to get into guitar riff. What more could you want? Although the song overall reminds me of Poison, 80’s Bush singer Todd “Trunk” McKenzie‘s vocals remind me of Stevie Rachelle‘s stellar performance on Tales From The Porn‘s debut album H.M.M.V., which did end up #1 on the Sleaze Roxx’s Top Ten Albums of 2017.

The third track “Injectable” is one of my favourites on the EP. It feels like 80’s Bush decided to just rock / jam out with an extended guitar solo rather than thinking of creating a hit single like on the two prior tracks and the results speak for themselves. If you’ve read my prior interviews, you’ll know that I am not a big fan of ballads but I got to say that the track “Don’t Go” is really good. You can feel the emotion in McKenzie‘s voice as he sings the verses and the ballad has got a nice melody to it and builds up quite nicely. Again, this is a song that Poison could have come up with back in their heyday. 80’s Bush‘s EP closes with a cover of AC/DC‘s classic “Whole Lotta Rosie” and I have to confess that I first wondered why 80’s Bush would even bother covering the song when it feels like it’s been covered a million times before. That being said, 80’s Bush‘s cover of “Whole Lotta Rosie” really rocks and so much so, that I don’t mind listening to their version despite having heard the song so many times before.

Overall, 80’s Bush have come up with an impressive EP that really showcases what they can do with the catchy single (“Mystery’s Wild”), the poignant ballad (“Don’t Go”), the jam like track (“Injectable”) and a sizzling cover (“Whole Lotta Rosie”). I hope to see 80’s Bush release one or two more videos in support of their EP because all three remaining songs are deserving of getting the video treatment. Check out 80’s Bush‘s EP Sleazy Dirty Rock n Roll. You might end up being pleasantly surprised just like I was.