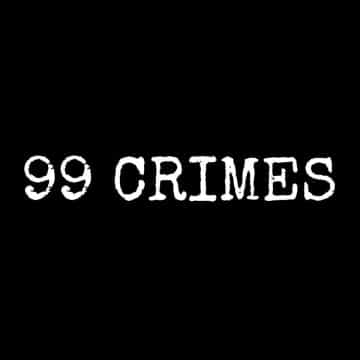 Review:
The name Paul Lidel is synonymous for me with two of my favorite and most underrated “hair metal” bands — Dirty Looks and Dangerous Toys. Of note, Lidel was a part of one of the most underrated albums out there — Dirty Looks‘ Cool From The Wire — which should have put the band on the same level back in 1988 as the bigger bands like Dokken, Ratt, etc. Accordingly, with such a strong track record behind him, I was very interested in checking out Lidel‘s new band 99 Crimes. Even more interesting was that Lidel was fronting the band. One listen to the song “Comin’ Down Like Rain” had me scurrying to find out where I could buy 99 Crimes‘ debut EP. As it turns out, 99 Crimes are on the record label Perris Records, which has released some really great albums in the past including one of my personal favorites — Wolfchild‘s self-titled debut full-length album.

At first, I thought that Lidel handled all of the lead vocals on the EP and I was thinking that his vocals reminded me a lot of Triumph guitarist Rik Emmett‘s singing and particularly on the song “Avenue.” If someone had told me that Emmett was singing the track with his trademark high pitched voice and I didn’t know that the song belonged to 99 Crimes, I would firmly have believed that it was indeed Emmett handling the lead vocals on that one. However, Lidel clarified to me that it was indeed bassist Jeff  Lynn handling the lead vocals on “Avenue.” So the similarities singing wise to Emmett belong to Lynn and not Lidel. I don’t know anything about Lynn and drummer Chris Jordan but they sound really solid and tight playing together.

The songs on 99 Crimes‘ self-titled debut are definitely not as sleazy as what you would expect from Dangerous Toys or Dirty Looks but they are not miles away either. 99 Crimes‘ music is closer to Dirty Looks in that the former’s songs are largely guitar riff centered and oriented. For example, “Do It Over” and “9 Pound Hammer” are built on a guitar riff that comes back over and over again. If anything, I would describe 99 Crimes as a mixture of classic rock and ’80s hair metal all rolled into one.

As you might expect from Lidel, you are getting some old school no frills rock n’ roll and his voice has a real retro ’70s feel to it. Lidel‘s guitar playing is solid and he doesn’t overplay on the songs. There isn’t one weak track on this album. In fact, all the songs are really good. It’s one seamless listen from start to finish although there’s probably no “hit singles.” The best tracks are definitely the lead single “Coming Down Like Rain” which also gets the video treatment and the riff oriented “9 Pound Hammer.”  It’s always difficult for a non-fronting band member to step out of the shadows of a successful cult like favorite band — in this case, two successful cult like favorite bands — to take the reigns and front his/her own project but Lidel has done a great job with 99 Crimes. I am now a true believer that Lidel could have forged (and still can) a music career as frontman in a rock n’ roll band.

There has been some amazing power trios in the past including Rush and Motörhead, and you can add 99 Crimes to that list. I am excited to see what the band comes up with next and hope that we don’t have to wait too long for the next release. You can purchase 99 Crimes‘ self-titled debut EP directly from Perris Records.