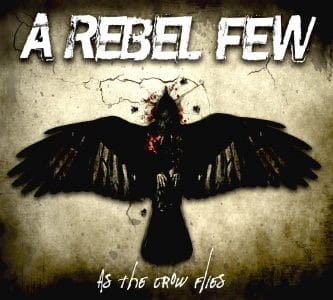 Review:
I heard this band for the first time last month on my local radio station. The DJ exclaimed the band was from Cambridge, Ontario. My first thoughts were “This sounds awesome.” I was reading others comparing the band to Pantera and Black Stone Cherry, so they were in lofty territory. The fact that they are a local band was a bonus. There was a CD release party the next night, but I couldn’t make it. I contacted A Rebel Few through their Facebook page, and asked about buying a CD. They offered me the album in digital format, but I am too old school for that. I prefer a physical format. The band suggested I contact their agent and ask for a free promo copy. The agent was out of physical copies. It didn’t need to be free. I’ll pay for it. It took a while, but I was finally able to meet with the merch people and buy a copy.

“Born Again” — Pounding drums and funky wah pedal guitar begin this song off. To me, the vocals from Chris Raposo are kind of like a mixture of Rob Zombie and John Corabi. In other words, awesome sounding. The middle of the song has a wicked guitar solo that lets you know these guys mean business. Raposo also gives us a brief guttural scream near the end of the song that would make a death metal vocalist jealous. The song mentions four words. driven, integrity, respect and trust. This suits the bands followers, the D.I.R.T. bags just fine.

“A Rebel Few” — Again with the pounding drums, but this time the guitars have a Dimebag/Zakk Wylde thing going on. The song is about not falling in line with the masses and standing tall.

“Empires Fall” — This song has hair metal written all over it. It sounds like it came right out of the late ’80s, early ’90s Sunset strip scene. I loved the bands that came out of that scene, so I was all over this song. The guitar solo in the middle of this song is pretty awesome too.

“Dyin Breed” — Neat start to the song where the sound comes out of the left speaker, and then the right. Has kind of a southern Texas, bluesy kind of ZZ Top thing going on. If Billy Gibbons and company had done a faster heavier song, this might have been it.

“Said N Done” — Another neat starting song where the guitar starts and stops. The background vocals are a nice addition. They are throaty, deep and help set this song apart. I wish they were used more on this album. The guitar work about three minutes in is pretty wicked too.

“Serious” — This song starts off a lot slower and lighter than the previous songs. After the first minute though, the pace and volume pick up. The first time I heard this song, I kind of wrote it off. It didn’t resonate with me, but after a few more listens, I got into it. “Are you for real? Are you serious?” isn’t exactly the best lyrical content ever, but as a whole the song resonates. The transition between the lighter beginning and the heavier end is a nice touch too.

“Who Knows” — This is kind of like a slower Volbeat song. The lyrics are about a “what if” scenario in which the band chose to go the 9 to 5 route instead of making music. I’m glad they went down the right path.

“Bitter Man” — Catchy tune with some cool” woah ohh ohh” in the background, and throaty snarls. Again with the cool guitar effects switching between speakers. This song has single written all over it.

“Pure Revolution” — Raspy, slower paced vocals start this song off. It picks up the pace a bit but still seems like a bit like a ballad near the beginning. Still heavy, and not cheesy though. There are slower/lighter sections and heavy/faster sections to this song. This song ends the album off with lighter vocals and piano, then pounding drums, wailing guitars and screaming vocals. A really good end to a really good album.

I put an extra effort into this album. At first listen it sounded a bit generic at times, and some of the songs started to sound alike. But because it was a local band, I spun it a few more times, and each time I liked it more. I am quite happy that a local band has made it good, and wish them continued success.

Reviewed by Boppin for Sleaze Roxx, May 2016

The official video for the song “Bitter Man” by A Rebel Few video shot and edited by Ryan Cannon Song recorded by Roman and Michael Zebik @ www.romansmusic.c…