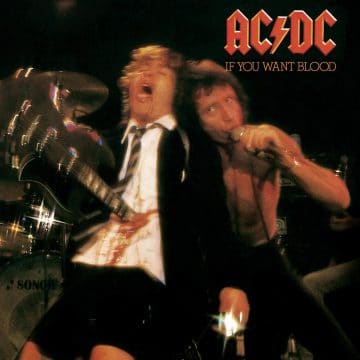 AC/DC
IF YOU WANT BLOOD YOU’VE GOT IT
Released on October 13, 1978 (Atlantic Records)

Review:
1978 was a huge year for me musically what with a shit ton of classic albums being released and right smack in the middle of them all a pair of killer records by one of my favorite bands at the time, AC/DC.

In the seventies, hard rock was this disrespected monster seen as merely noisy fodder for greasy haired pimply teens with few manners and even fewer possibilities of potential. AC/DC held this appeal because for every awkward teen male deemed unworthy by the “hip” side of the classroom, the band represented this idea that you could slide out of bed late, slip on your dirty jeans and sneakers and not only head out to take on the world, but get you some of whatever you wanted before the day was up. Never mind that in a short while, singer Bon Scott would ride this idea into an early grave, in 1978 we were living for the day with little concern for the future. All we riff raff wanted was to live out our own bad boy boogie daily.

Now the following year, I would totally get my ass handed to me with my first listen to what would eventually become my all time fave AC/DC record, Highway To Hell, but at the time frame of this review, I had already traded in my Abba records for the blistering Chuck Berry on whiskey sounds of 1977’s Let There Be Rock and the album Powerage, released earlier in the year. Already blown away by killer live records that year by Thin Lizzy, Ted Nugent, and the Scorpions, it was only natural that I would be digging every penny out of my jeans to pick up a copy of AC/DC‘s first recorded concert offering If You Want Blood You’ve Got It.

Released across Europe on October 13, 1978 (and the rest of the free world the following month), If You Want Blood is not only the last album by the band to be produced by long-time producers Harry Vanda and George Young but in grand AC/DC fashion simple and blunt to the point. In contrast to live albums of the period, If You Want Blood destroys with a single album worth of killer tunes as opposed to the then normal double or triple album format prompting author Clinton Walker to write (in 1994 Bon Scott bio) that the record “boasted a blunt ten tracks and, allowing nothing extraneous, got straight to the point, that being raging AC/DC rock and roll.” True, but in 1978 I was just glad that I had landed in Germany and was privileged to pick up my bloody copy early on.

If fans ever wondered how a single album could manage to contain ten live molten tracks of rock and roll within a mere 53 minutes or so, keep in mind we are talking about a band known to trim the fat and keep it short, sweet, and simple. Heck, the band didn’t even spring for a loud-mouthed roadie belching out an introduction of the band! The guys take the stage and just dive straight into opener “Riff Raff” (from that year’s Powerage) more than likely prompting the rowdy Glascow crowd to lift a room full of ales and lighters amidst a sea of cigarette smoke and sweat. You can’t find a better soundtrack for what in essence is a magnified drunken pub sing along. But perhaps the most interested thing about If You Want Blood has to be the songs on the album (as well as the tracks of the entire concert from which the tunes are said to have come) as already released future live staples like “T.N.T.” and “Dirty Deeds Done Dirt Cheap” are nowhere to be found. But for AC/DC in 1978 that’s no biggie, the band’s first live album is still stacked with great songs.

Kicking in with the audience clapping along, “Hell Ain’t A Bad Place to Be” is everything a Bon Scott fronted AC/DC song should be — nasty, crunchy, catchy, and loaded with booze, women, and down and dirty bad boy imagery. It is a bit of a tease for classic “Problem Child”, a similar killer track a few tunes later in the set and while both tunes follow a common format, in the world of AC/DC (where all tunes in some way fall into a pretty much the same territory), they rock balls on their own leaving only rocker “Bad Boy Boogie” to whip up the crowd in the interim before the lone chill spot of the night.

Slow, dark, and chugging, “The Jack” is about as close to a ballad as AC/DC has, or probably ever will get. If Journey are the kings of sweet love tunes, then AC/DC are the bastard princes of lust complete with dirty liaisons and STDs. With an audience chanting along, you can almost consider this Bon Scott‘s own blues version of a dirty rock and roll gang bang complete with ass shaking stripper grooves and bad ass guitar solo. Surely not your mama’s old Clapton blues.

Just a jump after the previously mentioned “Problem Child”, Bon and the boys drop into romp “Whole Lotta Rosie”, a tune so killer it has been covered live and on record by many but duplicated proper by none. “She’s a whole lotta woman” grunts Bon before Angus kicks into the solo and a room full of drunken maniacs grunt along. Beer drinking, arm waving cock rock like only this version of AC/DC could deliver. Yeah, Brian Johnson would eventually make his own classic mark fronting the band but in my opinion, the classic lineup found here is THE down and dirty rock and roll gang known as AC/DC.

When Bon belted out “take a chance while ya still got the choice”, I’d like to think he was actually lobbying to be damned to the dirty bowels of rock and roll hell so he could not just be another whippin’ boy but THE ultimate nasty sacrifice into “Rock ‘N’ Roll Damnation.” After all, what better way to set up a triple threat finale dedicated to the almighty Gods of rock via badass tunes like the bopping “High Voltage”, the bass blistering ode to everything loud, lude, and powerful “Let There Be Rock”, and the anthem of all present and accounted for — “Rocker?” It’s that closing trifecta of rock and roll that to this day remains damn near impossible to top. Rock and roll about rock and roll for rock and roll in the freaking name of rock and roll and no one before and since does it like that era AC/DC. Not to be insensitive, and we all love Brian Johnson, but if Bon had been told to quit or lose his hearing, he woulda grinned, took a shot, and screamed at the soundguy to turn the amps up. That or he woulda just rinsed his ears out with whiskey. Point is, Bon was rock and roll to the death, literally.

With rumors swirling that Angus is working on old Malcolm tracks with Cliff and Phil, fans are pretty excited and on the edge of their seats waiting to see if Brian mans the mic again. It’s the next best thing to Bon coming back from that highway to hell and taking us all to rock n roll damnation. And maybe the last chance for this much of that old classic AC/DC gang to truly say, “If you want blood…oh hell yeah…we still got some!”