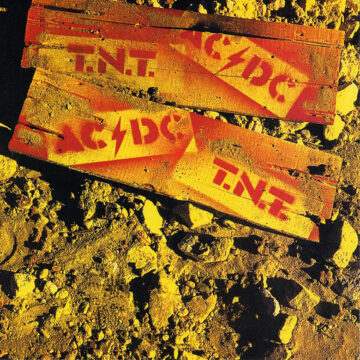 Review:
There are very few bands that have been so consistent in quality over the years while using the same formula than AC/DC. Going through line-up changes is a death wish for most rock bands, but AC/DC managed to roll on like a freight train throughout the past decades. T.N.T., released only in Australia, is the second studio album by the band. I would say this album marked a serious point in AC/DC’s career, which was the birth of their trademark sound. This composition is full of hard rocking rhythm and blues and loaded with some of the band’s most impressive songs. If you are more into the early incarnation of AC/DC, you will be a huge fan of the T.N.T. record.

Kicking of this album is “It’s a Long Way to the Top (If You Wanna Rock ‘N’ Roll).” A simple riff starts out this story of the challenges of becoming a successful rock band. Obviously, the most notable part about this song is the inclusion of bagpipes played by Bon Scott. I remember hearing this song for the first time and once the bagpipes kicked in, I thought I was hearing a remixed version of some sort. Even though it’s a very odd instrument to insert into a bluesy rock song, it fit in like a puzzle piece. Like I said before, this album gave us the AC/DC sound that we would come to love, and this song’s hard-hitting 4/4 drumming, along with heavy blues guitar work and unique vocals gives us a preview of what’s to come.

“Rock ‘N’ Roll Singer” is the next track, and the mix of the groovy bass line and Phil Rudd’s drumming gives us that chugging effect, which I personally dig. At heart, this is a blues song. The lyrical content gives us a simple, yet impressive story. Rudd’s drum fill that introduces the chorus is a nice touch, and Angus Young delivers us a raw solo, which becomes very typical of his playing. My favorite part about this song is definitely the bridge towards the end that crescendos into the final chorus. Okay, now we’re talking. “The Jack”, which is easily a top three AC/DC songs for me, is up next. Probably the most straightforward blues song on T.N.T., it makes you groove along as if you were part of the music itself. With a simple chorus of “she’s got the jack”, this song is a definite head-bobber. The riffing done by Malcolm and Angus Young gives you a lesson in blues playing, just with a harder edge. Although it’s not super obvious, I always thought it was funny how the real meaning of “The Jack” was actually about a venereal disease. This one’s a favorite for sure.

Beginning with a steady bass line, “Live Wire” is the fourth song on this stellar album. This one was never a huge favorite of mine, but that certainly doesn’t mean it isn’t a fantastic song. I love Rudd’s tom playing during the chorus, which gives us a spacey sound. Also, there’s something to be said about the growling background vocals we get, not only on this song, but throughout the album. It really gives these songs a certain bite. Up next is, of course, “T.N.T.”. I tell you what, if you don’t fist pump with every “oi!” during the introduction, I think you need to see a therapist. This is one of AC/DC’s most well known songs, and it’s clear why. A simple, catchy chorus? Check. Bon Scott going all out vocally? Check. Blistering guitar solo? Check. This song is all around perfect. I always loved how the tempo suddenly speeds up at the end, giving us the effect of a bomb going off. This is a hard rock staple, and always will be.

Immediately kicking into a high-tempo rocker is the aptly titled “Rocker.” The trade off between Scott’s quick a cappella and guitar hits give us hints of classic ’50s rock ‘n’ roll songs. It’s a shame this song never quite got bigger. This one is very underrated and another big favorite of mine on this album. Up next is my favorite AC/DC song of all time, “Can I Sit Next to You Girl.” I love every single thing about this song. The build up in the introduction is perfect. The riff is super pleasant to the ear and the way Scott sings is superb. Some of my favorite parts about this song include the fast paced riffing during the verse and Angus’ ripping solo. I have absolutely nothing bad to say about this track.

“High Voltage” is another one of those tracks that I can appreciate, but never really did much for me. It’s a fun song that included guitar playing that is satisfying to here, along with a great chorus. This seems like a song that should’ve been bigger, maybe up there with “T.N.T.” or AC/DC’s later song, “Highway To Hell.” Closing the album out is “School Days”, which is a groovy blues number. This is a very fun song, which was originally penned by Chuck Berry. AC/DC definitely do it justice and ended T.N.T. on a very rockin’ note.

T.N.T. is an album that really holds up in the AC/DC catalogue. This composition is chock-full of head-bobbing tunes and will not leave a fan disappointed. It is easy to see why this band is so iconic when you analyze the similarities that they keep pushing through their albums, all while keeping their work fresh and new.