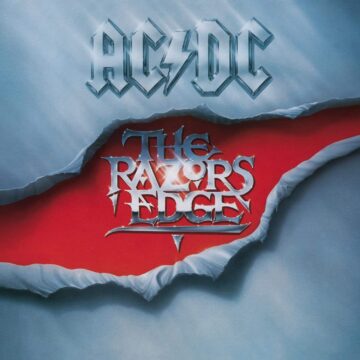 Review:
AC/DC are easily one of the most iconic rock ‘n’ roll bands of all time, and you would be hard-pressed to find someone who actually dislikes them. As the band pumped out hit after hit over the years, new fans from every generation were introduced to the world of hard rock and metal thanks to them. In 1990, AC/DC released their 12th studio album, The Razors Edge. Considered their comeback album, especially after the mediocre Blow Up Your Video, it really captured the band’s classic sound and style. The Razors Edge went 5x platinum, reached #23 on the Billboard Hot 100 and featured hits like “Thunderstruck” and “Moneytalks.” Personally, I think this album is a very solid piece of work. One thing you can say about AC/DC is that they know how to stick to a formula and keep it fresh every time.

Starting off the album is a tune that everyone has heard, whether it be at a football game, party, or a gym. “Thunderstruck” is a classic rock anthem if there ever was one, and the opening riff was discovered by accident by Angus Young. The best element of this song is how it begins with each instrument building up in energy with the chanting in the background, followed by a booming “thunder.” You can definitely notice the difference in drumming between Chris Slade, who plays on this album, and Phil Rudd. There’s so much more power and kick in Slade’s playing. Brian Johnson’s vocals are shown off in his unique way and he really delivers. Like many longtime fans of AC/DC and as someone who listened to classic rock radio growing up, I am completely burnt out on this song. “Thunderstruck” is a great track, but radio stations play it every hour and I’ve had my fill for a while.

Carrying on the energy from “Thunderstruck” is “Fire Your Guns.” This is a great uptempo song and a perfect example of a rock ‘n’ roll song. Lyrically, it’s not hard to piece together what “firing your gun” means in the song, which is the typical dirty content we get from AC/DC’s songwriting. My favorite part of this track are the background vocals yelling “fire!”, which is a nice touch. “Fire Your Guns” is one of the top songs on the album in my opinion. Up next is another big hit for AC/DC, which is “Moneytalks.” The intro is instantly recognizable, and I believe out of all the big hits from the band, this chorus is one of the catchiest. It just hooks you and brings you right in. I always liked the message in this song, which is about money blinding people who achieve success and how it changes them. Unlike “Thunderstruck”, I can still listen to this one without getting burnt out despite its constant radio play. I have no idea why, I guess I just may enjoy the song better.

The title track, “The Razors Edge”, is a bit of a change when it comes to the other songs on this album. It’s unique compared to the typical AC/DC sound standards, but they still pull it off. The intro is a bit reminiscent of Black Sabbath’s droning guitar sound. The drumming from Slade is wonderful and great guitar work all around. I like how the song makes you feel like you’re in danger or that there is some trouble on the horizon. The bridges were cool and it contained a great solo from Angus. Up next is my least favorite song on the album, but a fun one regardless: “Mistress For Christmas.” I’m not sure if this is just an AC/DC song that happens to have “Christmas” in the lyrics, or if it’s meant to be a Christmas song. It’s a silly tune, and although cringeworthy at some parts, it would be a great one to pop on the stereo in front of a fireplace during the holiday season with your family… just sneak some Jack Daniels in your hot cocoa.

“Rock Your Heart Out” is one of those songs that you can play while driving down the highway with your windows down. It definitely has bluesy elements to it, mainly in the verse. Cliff Williams plays a groovy bass line that really stands out here, which I love. The Razors Edge was produced in a way that puts the rhythm section out front, so we can hear Slade and Williams really groovin’ throughout the entire album. “Are You Ready” had pretty good success, and I honestly like it better than “Thunderstruck” and “Moneytalks.” The guitar intro really brings you into focus, and it’s very easy to sing along to. My favorite part of this tune are the backup vocals in the pre-chorus.

Up next is “Got You by the Balls”, which is a simple, steady song with a driving drum beat that helps it along. The bass walks us through the song with help from Malcolm Young on rhythm guitar. I’m not sure if it’s about getting a girl and doing anything to get some strange, a prostitute, or both. Regardless, it’s a funny song and a good rocker. Following “Got You By The Balls” is “Shot of Love”, which is an uptempo song that really makes you want to move. There’s not much there besides that, but it’s not terrible either. “Let’s Make It” is another tune with a steady beat with a great blending of lead and rhythm guitar. It’s a little bit pop-sounding, but not in a bad way. Johnson’s vocals are great and the chorus is very catchy. This one is another one of my top choices on the album .

“Goodbye and Good Riddance to Bad Luck”, which is a bit of a mouthful, is yet another example of how they put the bass up front. This tune is a good rocker, but I’m not a huge fan. Concluding The Razors Edge is “If You Dare”, which is my favorite on the album. It features a killer riff and I think it’s the most blues-inspired song on the album. The drums really swing and it keeps you moving.

Overall, The Razors Edge is a very strong album through and through. There is not a weak part on this album, and it shows how AC/DC can bring it when a lot of bands of their times faded out. The band cranks out hits and even their filler songs hold their own. It isn’t very often that a classic rock band holds up over time after lead singer changes, but the kids today still can’t get enough of the essential rock ‘n’ roll band.