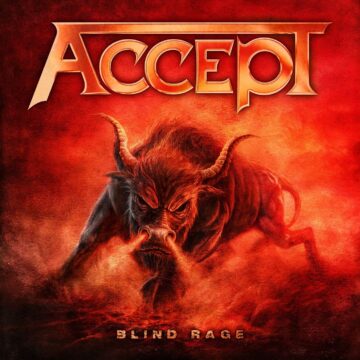 Review:
There is only one band I can think of that, 25 to 30 years after its ’80s heyday, is producing better music today than during that stellar period. Since reforming with diminutive but powerful lead vocalist Mark Tornillo less than five years ago, Accept has produced not one, not two, but now three absolutely jaw dropping CDs of pure heavy metal bliss. Those three records — Blood Of The Nations, Stalingrad and now Blind Rage — rival Accept‘s best during their golden era, namely Restless And Wild, Balls To The Wall and Metal Heart. Frankly, I think that the three Tornillo led albums are better — yes, better — than those three iconic ’80s albums.

In the last month or so I saw that Accept were receiving excellent review after excellent review for Blind Rage but I did not read any of them as I wanted to hear the band’s latest studio offering without any outside influences — or at least without any substantive opinions. Blind Rage follows off where Blood Of Nations and Stalingrad left off — if anything, Accept have kept the same formula more or less in terms of writing and song structure and did not try to re-invent the wheel. Why should they when the band is producing some of the best music of their long and storied history?

Blind Rage kicks off with “Stampede” which is another epic Accept track filled with the usual guitar tempos and solos that the band is now so well known for — and will surely be in the band’s live set for the rest of their career. My favorite on Blind Rage is the second track “Dying Breed”, which pays homage to all the great metal pioneers including Judas Priest, Black Sabbath, Deep Purple, Motorhead and Led Zeppelin. Meanwhile “Dark Side Of My Heart” and “Fall Of The Empire” are songs that are a bit slower yet remain heavy and powerful. I could go track by track and tell you how good each one is but I won’t bother, quite simply Blind Rage is a must own CD. I will mention though that not only do Accept provide very good songs, they tackle interesting subjects lyrically including drug abuse and prostitution in “Wanna Be Free”.

Is Blind Rage better than its last two predecessors? I would say no for the time being, but perhaps with time it will overtake both records in my mind. Blind Rage feels less gritty and more polished than Stalingrad and is also missing an instantly memorable song like Blood Of The Nations had with “Teutonic Terror”.

I would have been more than happy simply with the Blind Rage studio album given the high quality songs that are on it, but obviously Accept are all about their fans as the deluxe edition package includes a bonus DVD which features the band playing a full live show in Chile in 2013. The concert is stellar, well filmed and you get a nice selection of the classic Udo Dirkschneider era tunes along with four songs from each of the albums featuring Tornillo. The DVD offers 21 songs, not including Wolf Hoffmann‘s guitar solo and the intro music. Quite simply, Accept have really outdone themselves as their ‘Live in Chile’ DVD could have easily been released on its own — all I can say is thank you, thank you, thank you!

It is always nice seeing a veteran band show the youngsters how it’s done. With Blood Of The Nations, Stalingrad and now Blind Rage, Accept are not only showing young metal bands how it’s done but they are also setting a high standard for how metal should be played. Blind Rage should be in just about every metal fan’s top five albums of 2014 year end lists.