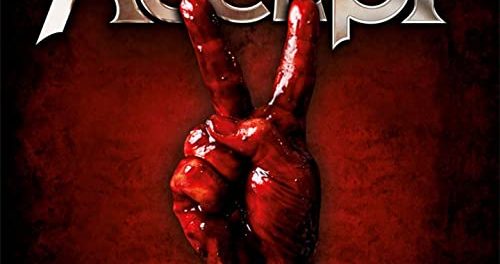 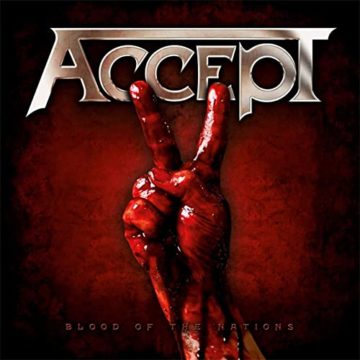 ACCEPT
BLOOD OF THE NATIONS
Released on August 20, 2010 (Nuclear Blast)

Review (August 2010):
I’d like to start by stating the obvious — Accept‘s last attempt at replacing Udo Dirkschneider wasn’t well received. In fact, I’ll go a step further and call it disastrous. American David Reece was a fine singer but frankly he didn’t fit the band. Much like Motley Crue‘s ’94 effort, the band that released Eat The Heat should have called itself something else other than Accept.

It took awhile for the band to reunite with Dirkschneider before they went their separate ways yet again. A few years ago they once again reunited to perform at a number of festivals abroad and when it came time for the band to make a commitment to do some new music together Udo balked at the idea. He instead elected to continue with his own band U.D.O. — leaving Wolf Hoffmann and company searching high and low for a replacement. This is no easy feat as they found with the David Reece experiment. To say that making another dire move filling their vacant singer slot would surely end the band is no understatement. Enter former T.T. Quick singer Mark Tornillo, who was snatched from obscurity to fit the bill. Tornillo sounds like a cross between Bon Scott and Udo Dirkschneider… so he can tackle the classic stuff without a doubt.

Blood Of The Nations stays true to Accept‘s traditional metal sound with its power riffs, blistering solos, bombastic grooves and the monster gang background vocals which have been a trademark for the band since its inception. I applaud Accept for releasing two memorable tracks to reintroduce the band to the world — “The Abyss” and “Teutonic Terror” are simply brilliant. And if you thought this was a label ploy to release the two best tracks to get the fans to buy an album full of filler think again. As a whole Blood Of The Nations is a solid album from beginning to end. Other notable tracks are “Kill The Pain” and “Pandemic”.

Mark Tornillo fits like a glove… if only they had found him when they lost Udo back in 1988. There isn’t a track on here that the album could have done without, it flows well and I can honestly say that once you hear this CD you’ll wish they played it in its entirety live and then ended the show with a handful of classics… it is that good.

Blood Of The Nations is a serious contender for album of the year. The album is a fresh start with a new singer at the helm that is true to the Accept legacy.

Review (August 20, 2020):
Accept’s Blood of The Nations is celebrating its 10th year anniversary this August. Since the release of this album, the band has gone on to release three other studio albums, Stalingrad (2012), Blind Rage (2014) and The Rise of Chaos (2017), respectively. With each subsequent effort, there was a line-up change and the albums suffered. The biggest blow took place in 2018 when bassist Peter Baltes left then surfaced in 2020 working with Udo Dirkschneider, but that’s a story for another time. In 2010,

I got a chance to talk with guitarist Wolf Hoffmann a pair of times including once for Sleaze Roxx. At the time, Hoffmann was over the moon about the reviews, “No kidding, I haven’t read anything bad about the album. How often does that happen?” He knows what he’s talking about because of what happened with Eat The Heat. It wasn’t without its stumbling blocks getting this band going. I saw Accept on the tour supporting Blood of The Nations in Portland, Oregon where they were booked to play at a venue that has a capacity of 1,400, but the night of the show, it was moved downstairs to the lower level where they have a room that holds 400 people. It was packed, it had the energy of a punk rock gig, but not exactly the big comeback that Hoffmann and company wanted.

Anyway, please refer to my original album review above and here are my final thoughts on Blood of The Nations a decade later. Blood of The Nations is one of Accept’s shining moments and it could go toe to toe with classic albums like Breaker, Restless And Wild, Balls To The Wall or Metal Heart. It’s that good! Tornillo did what David Reece could not do — win over the fans, and write a great Accept album. As I mentioned at the beginning of this, the records after this were a bit uneven and while they had their moments, none could recapture what Accept did on Blood of The Nations.

Reviewed by Ruben Mosqueda for Sleaze Roxx, August 2010 and August 2020