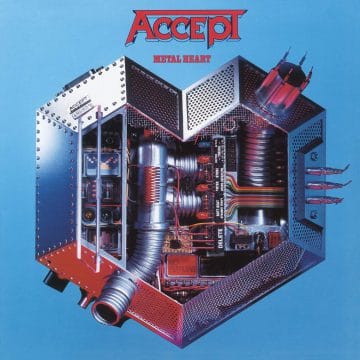 Review:
Accept are one of Germany’s best known metal acts, second only to the Scorpions, but I always considered them a rock band. Accept are a metal band. They played a huge role in the development of thrash and speed metal, influencing some of today’s heavy hitters. Their Metal Heart album issued in 1985 was the follow-up to their American breakthrough album Balls To The Wall issued the previous year. They were plastered all over MTV with the gritty anthemic “Balls To The Wall.”

With Accept having had a taste of success stateside, they tried to get an even wider reach in North America by injecting more melody in their songs and writing catchy hooks. Accept ultimately fell short. They didn’t have dashing good looks. You have to respect them for not revamping their image. They kept singer Udo Dirkschneider’s camouflage fatigues, buzz cut and combat boots. It was more Village People than Quiet Riot or Mötley Crüe, but it worked very well for them.

While Metal Heart didn’t blow the doors wide open for Accept in the U.S.A., it did provide us with a damn fine metal album, nonetheless. The title track found guitarist Wolf Hoffmann injecting Tchaikovsky‘s “Slavonic March,” and Beethoven‘s “Fur Elise” into the metal classic. Other standouts on Metal Heart are “Midnight Mover” which received MTV coverage and featured a video with a strobe effect and fast paced 360 camera angles that could be seizure inducing. “Midnight Mover” was extremely melodic, very catchy and had all the ingredients that Accept needed to get on radio. Other notables on Metal Heart are “Bound To Fail” and “Screaming For A Love-Bite.”

No question, Metal Heart is one of Accept‘s best albums of the Udo era. Obviously, it wasn’t as good as Restless And Wild and Balls To The Wall — the two albums that preceded it. Accept had a bite of the apple with the success of Balls To The Wall. They tried a bit too hard on this one, and to the point that they sacrificed some of the momentum they gained with the two previous efforts. It ultimately didn’t pan out and they never regained their footing. The follow-up Russian Roulette was even more commercial and then came Eat The Heat but by that point Udo was long gone. I digress. Metal Heart is still very much worth checking out.