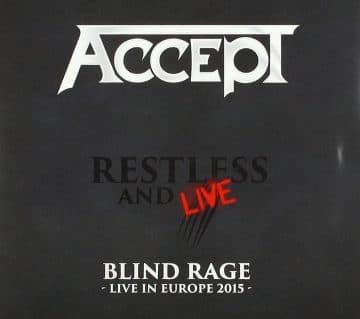 Review:
It’s taken me a while to get Accept‘s Restless And Live CD/DVD but I am glad that I finally bought it. When I had purchased Accept‘s studio album Blind Rage back in 2014, it had come with a bonus Live In Chile 2013 DVD, which I really liked at the time. I enjoyed the classic Udo Dirkschneider era tunes along with four songs from each of the albums featuring Mark Tornillo at the time. The big difference since my viewing of that bonus DVD and my acquisition of Restless And Live is that I got to witness two concerts from Udo Dirkschneider playing the Accept classics under the Dirkschneider band name. The first time was in January 2017 (which turned out to be my concert of the year for 2017) and the second time was in February 2018. No need to say that both Dirkschneider concerts were very good and cemented in my mind how important Udo Dirkschneider‘s voice was to the sound of older era Accept.

After seeing those two concerts and enjoying Dirkschneider‘s live album Live – Back To The Roots, all of a sudden, hearing Accept‘s current lead vocalist Mark Tornillo singing his renditions of the Dirkschneider era Accept classics sounded a lot different. I wasn’t enjoying Tornillo‘s versions of the songs like I did when I first listened / viewed the Live In Chile 2013 DVD. I actually found myself enjoying the Accept songs from the albums Blood Of The Nations (2010), Stalingrad (2012) and Blind Rage (2014) on Restless And Live way more than the Tornillo‘s version of the Udo Dirkschneider era Accept songs. Now don’t get me wrong. Tornillo is a fantastic singer and worthy replacement for Dirkschneider but I now agree with the latter that the feel and emotion of each song from his era has been lost with Tornillo. I couldn’t understand Udo Dirkschneider‘s comments in an interview that the songs sung by Tornillo lacked feel and emotion but after seeing Dirkschneider play those Accept classics live in the last two years, I finally get it!

All of Accept‘s main classic and Tornillo era releases are represented on the CD portion of Restless And Live with two songs from Breaker (1981), four from Restless And Wild (1982), three from Balls To The Wall (1983), three from Metal Heart (1985),  one from Objection Overruled (1993), three from Blood Of The Nations (2010), three from Stalingrad (2012) and a whopping eight from Blind Rage (2014). Now normally, I would not be too enthused about having a veteran band like Accept play so many tracks from their new album and having them show up on their live album. One example is Iron Maiden who had six songs from their last studio album The Book Of Souls on their latest live release The Book Of Souls: Live Chapter. That was way too many new tracks on a live release simply because while a decent album, The Book Of Souls was not good enough to have about 45 minutes of the live album dedicated to those new songs. On the contrary, Accept‘s Blind Rage is an excellent studio album and although a bit of a step down from its predecessors Blood Of The Nations and Stalingrad, it’s worthy of having many of its tracks played in a live setting.

I was actually surprised by how much I enjoyed the Tornillo era tracks on the Restless And Live CD. They are actually heavier with less nuances it seems than the older Accept tracks and as previously mentioned, Tornillo is a good singer but doesn’t quite do justice to the old Accept classics. I recall reading a recent interview from Sleaze Roxx contributor Ruben Mosqueda for KNAC where guitarist Wolf Hoffmann opined that Accept definitely did not need to play “Balls To The Wall” anymore in Europe and they could do that in America as well. I tend to agree with Hoffmann with respect to having Accept presumably being able to drop any Dirkschneider era material from the band’s live setlist. It’s kind of like Dirkschneider only playing U.D.O. songs from now on. That being said, I think Accept‘s Tornillo era material is superior to the U.D.O. songs (with the exception of Animal House which really should be considered an Accept album since it was written for and gifted to Dirkschneider when he first departed Accept).  All this to say that I find that the Tornillo era Accept songs strong enough to play live without any Dirkschneider era Accept songs.

Overall, Restless And Live is a very enjoyable double live album. It has a good mix of old and new Accept tracks, and really demonstrates how strong Accept‘s Tornillo era songs are and what an amazing comeback that the German band has done since 2010. The DVD with Accept‘s performance at Bang Your Head is an extra bonus and makes this package money well spent.

Accept‘s “Fast As A Shark” (from Restless And Live) video: