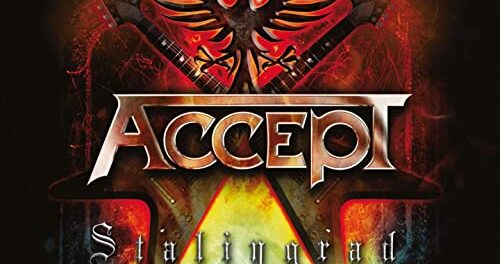 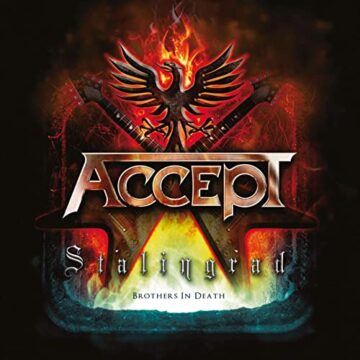 Review:
Accept returned in 2010 in a huge way with Blood Of The Nations, an album which proved that Wolf Hoffmann and company could press forward without original singer Udo Dirkschneider, who refused to take part in a reunion. The band instead enlisted Mark Tornillo, formerly of T.T. Quick, who did splendid job on Blood Of The Nations as well as with the classic Accept material.

The big question now is how would Accept fare on the next album? I spoke with Dirkschneider in 2011 and he said of Blood Of The Nations, “I expected a good album — of course if they had 15 years to write an album it’s going to be good.” While Hoffmann has said time and time again that all of what we heard on the comeback effort was completely new material, you can’t help but question if Accept could do it again.

So here we are in April of 2012 and Accept‘s new album Stalingrad has finally arrived — and once again the band brought Andy Sneap onboard as producer. The first song released to radio was the title track which features a ‘respectable’ riff and the trademark Accept gang vocals. The single “Stalingrad” has a Russian vibe that makes me think of Communism, the Kremlin and The Red Army — and to be frank, I wasn’t as impressed with this song as I was with “The Abyss”, which launched Blood Of The Nations in 2010. The opening track “Hung, Drawn And Quartered”, much like the aforementioned, is ‘good’, but it is a far cry from the stellar work we heard on the band’s previous effort. It’s a double-edged sword when you raise the bar so high, because the next time around you’re competing with yourself! So two songs into Stalingrad I was already concerned.

Thankfully by the third track things picked up as “Hellfire” is a furious, classic metal song that rivals the best of the best from Blood of the Nations. From there Stalingrad‘s standout moments are “Flash To Bang Time”, “Revolution”, “Against The World”, and “The Quick And The Dead”, which saved the album from being ‘average’ to ‘rather good.’ The aforementioned tracks feature Accept‘s prototype for muscular, powerful, metal hymns that we’ve come to expect and love.

In the end, Stalingrad is a ‘very good’ album. While Stalingrad doesn’t topple Blood Of The Nations, the production by Andy Sneap is top notch, Mark Tornillo has become very comfortable in his role fronting the band, and Wolf Hoffmann proves that after 33 plus years in the business his passion still burns.