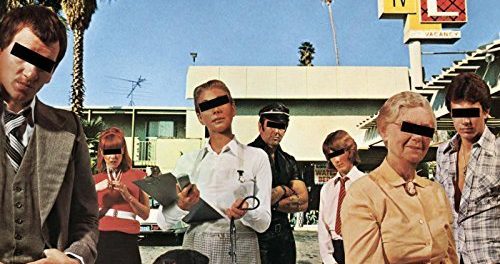 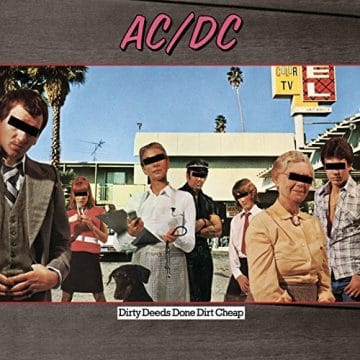 For a casual rock fan, they must be confused when you hear Bon Scott‘s vocals and only a year earlier, you hear Brian Johnson laying done some serious high voltage on Back In Black. But for us buying everything in sight in regards to AC/DC, we knew the deal….. 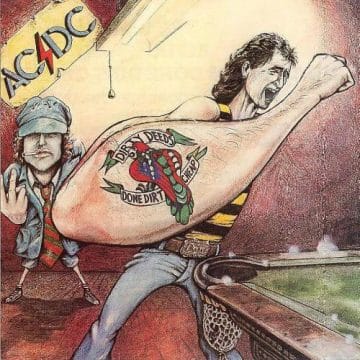 courtesy of Angus and Malcolm with Phil Rudd‘s drums and Mark Evans‘ bass keeping the bottom end sounding evvvvvvil! Love the rawness of this tune! Actually, the whole album for that fact! Bon really stepped up his lyrics on this record. “Dirty Deeds…” gets the party going with an obligatory Angus rifffage solo and Bon throwing down some one liners in the form of ‘Cyanide, High Voltage, TNT…” Atta boy Bon — the business man name dropping the other AC/DC records available at the time of Dirty Deeds… release (1976). Must give some bonus points for Angus or whoever it is yelling “Aaaaaaaargh” at the end!

“Love At First Feel” —  Also love the opening of this song! Boom with a little kick of some kind of feedback and we’re off! I always dug AC/DC‘s backing vocals and this album delivers that street brawl vibe in them! Angus and Mal are locked n’ loaded on guitar and Phil and Mark keep the party going! Bon does Bon man… Great lyrics! The driving bopping bass keeps this number hopping.

“Big Balls” — Just think you’re a 14-year-old boy and you buy this album and there’s a song on it called “Big Balls!” This song is a classic and I wonder why AC/DC never pushed this song huge. As a single man, it’s so friggin catchy. Angus plays that sleazy opening riff and Bon rambles aloud about ballroom dancing! Well kinda of…. The song title aside is reaaaaal good! Cool beat, great vocals, real classy cleverly written lyrics and my fav is the gang backing vocals at the end chanting “Basllsucker Ballsucker Ballsucker!”

“Rocker” — Once the beer bottles and fists start flying out comes Angus riffing like a looney tune and Bon and company keeping up with Bon like he does with many a tune writes the lyrics to his lifestyle! This is him “wheeler, dealer, wicked woman stealer, cruiser, bruiser rock n’ roller man.” This song is like Chuck Berry on speed! Driving bass and drums that smash your brains in and a couple of quick boots to the noggin’ courtesy of Bon!

“Problem Child” — OK, like I just said, Bon writes lyrics like he’s lived them and this is no exception! Holy hell, you want street fighter mode Bon? It’s all here in the lyrics! Now, I remember years ago back in high school when AC/DC was huuuuge and we had a discussion about the opening of this song, we all thought Bon said “Fuck this”… but he actually says “Cop this.” Ha! Witty Bon fooling a bunch of young hooligans (us) with his phrasing. “Problem Child” is a mean shit kicker of a track. Angus drives the riff off the tracks and Bon throws down some more great lines “every night, streetlight… I drink my booze, some run, some fight. I win they lose!” Bam… poetry in motion!

“There’s Gonna Be Some Rockin'” — Just a jamming good time straight ahead feel good tune! Gonna be some rocking at the show tonight! It’s like the fellas just plugged straight into their Marshalls and Bon slammed back some gin and hit the mic and voila — instant tune! Just head to the smoke damnit!

”Ain’t No Fun (Waiting Round To Be A Millionnaire) — Bon writes what he’s living and this is the dream in 1976 for him! He ain’t waiting… this is almost a seven minute AC/DC song that just riffs along and before you know it, it’s done and that’s due to Bon‘s lyrics and the band driving along the tempo and keeping the ship rock steady. Love at the beginning of the track how he throws down the old disclaimer of “only the names have been changed to protect the guilty.” Wowzers! Bon, this shit is getting real! The song keeps plowing forward and jives up at the end when Bon says “Hey! Hello Howard? How ya doin? My next door neighbour! Oh yeah… Get your fuckin jumbo jet off my airport!”

“Ride On” — Slow animal this song is! More Bon livin’. This is slow blues rock! Phil‘s drums keep the song going at a decent mid level clip. Bon‘s driving and drifting along as he’s gonna ride on! The backing vocals are chill! The pace is chill and Angus throws down a real chill solo that adds to the tune! Great song that if you recall got a second lease of life on Who Made Who (Maximum Overdrive soundtrack album from 1986).

“Squealer” — What would an AC/DC album be without a low down dirty sleazy kind of tune? Umm, nope not here! “Squealer” takes the album to its ends. Meaning end of album and end of party! “Said she never been bailed before, and I don’t think she’ll ball no more. I fixed her good!” sings Bon as he takes along on his journey with a (insert cool backing vocals) squealer….! Crank the video… say no more!

In conclusion, Dirty Deeds Done Dirt Cheap in 2016 simplifies the word classic! Classic sound, off the wall lead singer, wild crazy antics of dude wearing shorts ripping around short burst of ammo shots off of the fretboard of his Gibson SG guitar, all harnessed in by Malcolm, Mark and Phil! Whew… Dirty Deeds Done Dirt Cheap is a great record! This record is street! As in hard rocking and if that don’t fit, help yourself to a fistful of a Bon knuckle sandwhich!