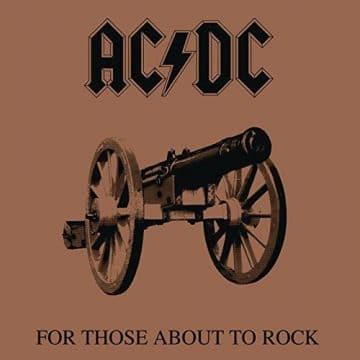 AC/DC
FOR THOSE ABOUT TO ROCK WE SALUTE YOU
Released on November 23, 1981 (Albert/Atlantic Records)

Review:
So here we are back in November ’81 and those smart suits at Atlantic Records are getting out new AC/DC product before Christmas, which we all know means $$$$$ for the record companies ….

I have always loved the cover. A simple cannon. In the background, some kind of copper like colour, the logo of AC/DC of course and what a great title for a bunch of young fanboys like myself.

For Those About To Rock (on the front cover), We Salute You (on the back cover). Of course, we were gobsmacked as there were ten more new songs, which I will get into shortly, but the real kicker was that it was a gatefold album. Boom! I opened it up, and there it is — AC/DC in a live action shot! Wowzers! We must have stared at that picture for minutes… and no, we were not baked! AC/DC had built their reputation not only on studio albums but the touring angle as well, hence the great live shot.

Not too many bands did gatefold sleeves at the time — well in my collection anyways. Of course, I had the two KISS live albums (Alive! and Alive II), Cheap Trick At The Budokan, Dream Police and Rush‘s Exit Stage Left and that was it for gatefold sleeves…

After For Those About To Rock‘s release I heard chatter in my highschool halls that the album sounded like Back In Black. Ha ha ha ha… no shit Sherlock. The previous seven AC/DC albums all sounded alike but that is AC/DC‘s deal and more power to them. I dug it and bought into the program! Oi! I mean, why would AC/DC change it up now? They were huge. They had Mutt Lange once again produce as he twiddled the knobs as producer on Back In Black and before that, Highway To Hell. Bassist Cliff Williams, drummer Phil (“Breaking the law”) Rudd, singer Brian Johnson and those crazy wacky Young brothers, Angus and Malcolm, keep the parteeee going (cannon included!)

“For Those About To Rock (We Salute You)” — Angus gets our attention real quick with his real cool picking and brother Malcolm lays down the ultimate riff! Here comes Cliffy (bass), Rudder (drums) and Jonno. He is already cooked hollering “we roll tonight to the guitar bite!” Of course, if you’re a fan of this album, you know this song’s deal! The verses and chorus move along at a mid tempo pace and the band shifts gears once Angus nails down the solo. Johnson tells us all to “pick up balls, load up your cannons for a 21 gun saluuuuute!” There they be… cue cannons… “FIRE”… By golly, AC/DC dumped some cash into the sonics on this album as these cannons sound real! As the song ramps up, Angus goes speeding up and down his guitar neck and the song ends with one more round of cannon fire. If you’re looking for an attention grabber, look no further than track one.

“Put The Finger Right On You” — Angus leads off and Phil joins in on drums while Jonno lays down the vocal. Man, this dude was singing in the high registers on this album as he did on Back In Black. The guitars carry this one as does Angus during his solo.

“Let’s Get It Up” — Angus once again opens this mid tempo tune and the band steams ahead. Johnson is crafty with the lyrics on this song. At one point, he sings “It’s high tide, let’s ride the moon is rising and so am I.” Poetry in rock motion my friends of arena rock and why do I say that? Easy peasy — 35 years later, these lyrics are welded into the neanderthal portions of my brain. Guess what? I’m totally ok with this! Angus does not abort ship but shifts gears in a real nice solo and he shows why he’s always been a great hard rock blues guitar player as he can play off the wall bonkers solos and chill it back and play blues solos cranked up to 10 on his Marshall.

“Inject The Venom” — This is serious AC/DC! Big sound from the band stops and crashes at the start and lets Brian wail his vocals in between bursts of high voltage heavy riff rock. The chorus is real good and man, Angus nails down the solo like a lightning bolt zinging the fretboard of his guitar! V-E-N-O-M! It’s a great tune — a gem. I mean Johnson could peel paint off the wall with his vocals on this record. As always, top-notch straight ahead hard rock beats courtesy of Mal, Cliff and Phillip.

“Snowballed” — Kinda one of those tunes that no one talks about but I’m gonna! I love “Snowballed.” It just cranks heavy blues rock from the start and it took me years to figure out what Johnson‘s singing about on this track. Vocally, this track, he’s giving er! “You been snowballed!” yelps Brian while Angus and the boys are steaming down full throttle about to come off the tracks. Angus just lets it rip and that’s the deal for early ’80s AC/DC fast hard driving rock!

“Evil Walks” — The beginning riff sounds like evil to me and this opening to this tune feels like we’re all going down to hell! Dig how the band shifts gears at the start and by the time Johnson joins, we’re off to the races. Everything is great in this song! I love the street backing vocals courtesy of Cliff and Malcolm. They ain’t singers man. They’re just dudes in jeans and t-shirts that open their mouths and there’s the vocals. On record is what you hear live.

“C.O.D.” — I love this tune! I love the crisp clear snap mix of Phil‘s high hat. Speaking of mixed drums, AC/DC always got great drum sounds on their albums and the only other band that has come close is The Cult on their Electric album. Man, those drums on Electric are so crisp so clear and were talking about The Cult back in 1987. “C.O.D.” is great with just the one guitar at the beginning joining Phil and Brian singing about ‘Call of the dog, Cry of the bitch, Cream of the dream is the cause of the itch, Call of the doctor, Cash on demand, Get enough rope might even hang.’ Boom! The band ramps up and we’re off to the real catchy chorus “C.O.D.”… Man, I just love this tune and why not? It’s simple yet very effective. It’s AC/DC doing what they do best — teaching all of us 14 year old boys back in 1981 the birds, bees, dos and don’ts of life! For that, thank you AC/DC.

“Breaking The Rules” — A slow barn burner of a tune as the band just grooves off the top. Angus once again goes into some inner channel old blues guy and plays a low down n’ dirty solo. This tune is a slower paced AC/DC kinda animal! Phil, Cliff and Malcolm lay back the groove and no worries peeps, if you’re gonna break rules, break them with AC/DC.

“Night Of The Long Knives” — The band starts out of the gate on time all together and this song is one of those end of the finish line gem classics that no one ever talks about! I love the guitar during the verses as they sound like pure evil. The chorus is real and I mean real catchy. This tune is how we like our fav Aussies — dviiiiil man, pure eviiiiil! Pour a drink, roll a fatty and watch the video!

“Spellbound” — A tune that wheezes and sniffs its way to the finish line. Back in my youngian daze, I would kinda be done after “Night Of The Long Knives” but over time, what makes a great song sometimes is the slow grower that over time will win you over. “Spellbound” is that. The chorus is “Rock ‘Em, Sock ‘Em” — a different kind of AC/DC but not really… Hey, it all can’t be about booze and humping! Well, it can be…

In conclusion, on any given day, For Those About To Rock We Salute You can easily be up there in my favorite AC/DC albums. Yeah, seriously, like why not? Sure, my all-time favorite AC/DC record is Flick Of The Switch but they’re all great in one way or another and I can honestly say AC/DC would never be featured in a 3/4s filler episode. Nada! Not happening here. Seriously, through 1981 and now into 2016, For Those About To Rock We Salute You is an all-time classic I just love it.

AC/DC‘s “For Those About To Rock (We Salute You)” video: