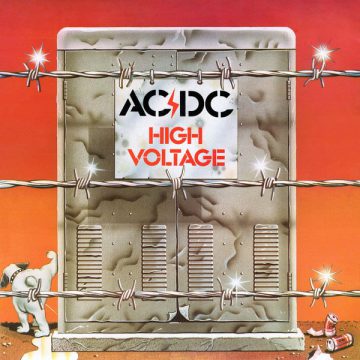 Review by Dan O’Connor in February 2011:
Released in 1976, AC/DC‘s first international album, High Voltage, was slammed by RollingStone magazine as an all-time low for hard rock music. Comprised of songs from the band’s first two Australian albums, it is quite clear to anyone who isn’t musically retarded that High Voltage was anything BUT a low point in hard rock — in fact it is one of AC/DC‘s finest and a classic within the genre. 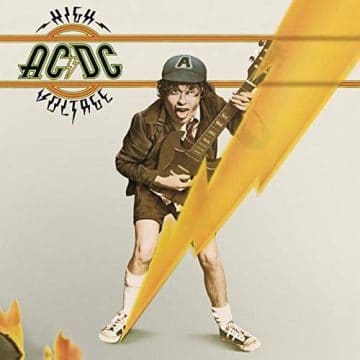 wrote the review in RollingStone, might have been offended by the lyrics to “Rock ‘N’ Roll Singer”, as he is exactly the type of mainstream maggot they are aimed at with “Well you can stick your nine to five livin’ and your collar and your tie; And stick your moral standards ’cause it’s all a dirty lie; You can stick your golden handshake and you can stick your silly rules; And all the other shit that they teach to kids in school (‘Cause I ain’t no fool).”

“The Jack” is a very cleverly written blues tune about the clap, which is disguised as an innocent game of cards while “Live Wire” has a high pitched guitar section that Mötley Crüe would later use in “Piece of Your Action” — check it out. The rest of the album is tremendously fun to listen to, especially live staple “T.N.T.”, the band’s first ever single “Can I Sit Next To Your Girl” and “Little Lover”, although the latter is not as smutty as it seems — apparently it was written by Bon Scott about Angus Young, who alongside his brother Malcolm, provided riffs galore on this album.

High Voltage has stood the test of time, leaving just one more thing to say — screw you RollingStone magazine!

Reviewed by Daz in February 2020:
Being the designated Aussie in the Sleaze Roxx crew, I thought it would only be fitting if I wrote a few words about AC/DC’s debut album High Voltage, released in February 1975. As a little background, before AC/DC had stepped foot on international soil, or released an album internationally (that wouldn’t come until April 1976 for both circumstances), the band had released two albums in Australia — the aforementioned High Voltage and the follow up album T.N.T. in December 1975.

Over the course of their career, AC/DC have made several good decisions which have resulted in them becoming the rock legends that they are. The first of those decisions was to fire original singer Dave Evans, who befitting the times, was a flamboyant frontman, but was ultimately not going to fit into the Young brothers’ future plans. Credit where credit is due though, Evans will go down in history as the singer on AC/DC’s very first single “Can I Sit Next To You, Girl” released in July 1974, even though that single and version of the song was only released in Australia. Evans’ tenure with the band would be complete by September 1974 before AC/DC made their next good decision — recruiting Bon Scott to be their singer.

In February 1975 when High Voltage was released, I was only three years old, so obviously my introduction to the band was still several years away. I remember that time vividly though — I was in primary school and I might have been about nine years old at the time. One of the kids was showing off his new cassette player and he was playing the High Voltage album. The song emanating from the speakers was “She’s Got Balls” and even though the gathered cluster of kids listening to the song were young and naive, we still had enough understanding to know that the innuendo filled lyrics had a double meaning. It was exciting. Here was a band performing a song about balls and they weren’t the balls we kicked around in the playground (though some balls would occasionally be injured accidentally during those activities). For a young kid, listening to that song was like living on the edge. Imagine a group of silly kids giggling every time the word balls was sung. And as we continued to listen to the rest of the album, we cautiously scanned the playground to ensure that we didn’t get caught playing this rude music by the teachers.

Song wise, High Voltage has some great and enjoyable songs, but evidence would suggest that they aren’t great enough for AC/DC to add into their setlists. Therefore, to many fans, these songs are simply forgotten. The album opens with “Baby Please Don’t Go” which is a cover of a Big Joe Williams tune written in 1935 which has been covered a countless number of times before in many variations. It’s an unusual step to open a debut album with a cover song but despite this, “Baby Please Don’t Go” is a rollicking fun tune setting a good pace, with Scott’s swagger and passion on full display, and both Malcolm and Angus Young’s guitar playing paying homage to their blues driven influences. “She’s Got Balls” plods along with its mid-tempo groove, vocals full of attitude and the first example of what would become a common trait for AC/DC in the form of deep low voiced backing vocals, highlighted more so by future songs such as “T.N.T”. “Little Lover” is another plodding mid-tempo song with Scott passionately telling us a tale about a night spent with a fan. The lyrics are clever and witty, and some of my favorite from the Scott-era. “Stick Around” is probably the closest example of what AC/DC would eventually become with it’s solid basic riff, variation verses and squealing lead breaks.

A favorite of mine is “Soul Stripper” with its fabulous introduction. The bass keeps a simple rhythm going while the guitars do various build up sections, culminating into an eerie section highlighted by clave hits, ending up giving off a voodoo type vibe. The vocals eventually commence around the two minute mark and as expected Scott is telling us another tale about another girl. “You Ain’t Got A Hold On Me” is a nice basic rocker similar in many ways to “Stick Around” but not as energetic and relies on a basic blues riff structure.

In what many people would think impossible, AC/DC actually do a ballad on this album. “Love Song” was never released internationally so there may be some fans out there unaware of its existence. The introduction is much like “Soul Stripper” with its many build up sections. We have the initial section, which has an orchestra feel with a guitar playing off as a piano / keyboard. The next transition goes into a more traditional band scenario with a greater tempo, big guitar chords and fret board hammer on and off’s providing a high pitched melody. Then just like that we transition again unexpectedly into sweet lovey-dovey mode with Scott subtly crooning away about his feelings for a girl named Jene. For the time, it was a nice experiment, but as we now know, something the band has never tried again. “Show Business” is another rocker that relies on a basic blues rhythm and feels like a precursor to better songs about the industry that will come in the form of “It’s A Long Way To The Top”, “Rock N Roll Singer” and “High Voltage”.

High Voltage is an album clearly in the phase of a young AC/DC (now there’s a pun!) trying to work out who they are and who they want to be. It’s an amalgamation of where they came from with Evans fronting them, before fully transitioning into something tougher with Scott at the helm. Considering the follow up album T.N.T. was released a mere nine months later, the band took no time at all deciding the route they would take, leaving all the Evans over the top glam and pop traits behind, even though they would rerecord “Can I Sit Next To You Girl” for T.N.T. and Scott’s fashion sense would still lean towards glam — but in a much reduced capacity. No doubt the recruitment of Phil Rudd (drums) and Mark Evans (bass) during this period also helped solidify the line-up and really give AC/DC that supportive rhythmic backbone. It’s also interesting to note that Scott had been in the band for just over a year before they released High Voltage and his lyrical style, content and tongue in cheek humor would remain relatively unchanged throughout his later years.

So for me, the big difference between the AC/DC of High Voltage and the AC/DC of T.N.T. is the way the music is delivered. The riffs became tougher, energetic and more memorable. They found a sense of menace that was missing early on, making them appeal to the working class. And dare I say it, they found some balls.