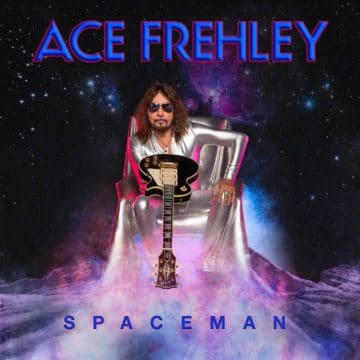 ACE FREHLEY
SPACEMAN
To be released on October 19, 2018 (Entertainment One)

Review:
Ace Frehley has been extremely active since 2009. When he returned that year, it had been a twenty year hiatus between Trouble Walkin’ and Anomaly. Since that time, he’s followed things up with Space Invader (2014) and his covers album Origins Vol. 1 (2016). The new album is titled Spaceman, which sums up what Ace will always be remembered as with or without the paint on. The new album, unlike the previous album, is all new material, well aside from a cover of Eddie Money’s “I Wanna Go Back.” Let’s face it, Ace hasn’t released a ‘bonafide’ classic that will unseat his ’78 solo album. He’s gotten close with Frehley’s Comet (1987) but it’s unlikely that it will happen at this stage in his career. The thing about an Ace Frehley album is that it will include some quirky lyrics, some cartoony vocals and some pretty cool riffage and explosive guitar solos. Spaceman continues that tradition.

As stated, with most Frehley albums, there’s songs that really hit the spot and others that you could live without hearing ever again. There’s three songs on this album that are absolutely classic Ace. “Rockin’ With The Boys” sounds like a vintage KISS song that gives a “Rocket Ride” or “Shock Me” type vibe. It’s simply spectacular and could become a staple in the Ace Frehley set from here until he decides to call it a day. “Bronx Boy” is a sloppy, simple at times lyrically pedestrian song, but it works for Frehley. He’s not deep lyrically. This is an autobiographical tune and let’s be honest here, Ace has never written lyrics for intellectuals. Another example of this is “Pursuit Of Rock And Roll” which cuts to the chase lyrically and simply rocks.

What would be an Ace Frehley album without a cover? Well, on this one, he tackles Eddie Money’s “I Wanna Go Back” — a song that you’ve heard before. Ace doesn’t stray too far from the original arrangement, though as you’d expect, there’s a heavier helping of guitar. I’m indifferent to the song overall, but it does fit within this collection of songs. If you’re looking for an instrumental, then you’ll love “Quantum Flux.” Instrumental tracks have become a tradition on Frehley records. Some are better than others. “Quantum Flux” is a tad different than previous instrumentals in that Ace enters ‘progressive’ rock territory. That’s refreshing and out of the box. Spaceman is a good, fun record, but that only diehards will appreciate. In the end, isn’t that really the people that will buy it on release date or that pre-ordered it?