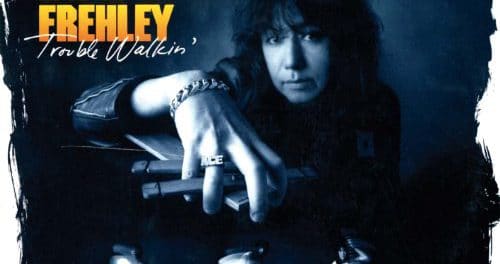 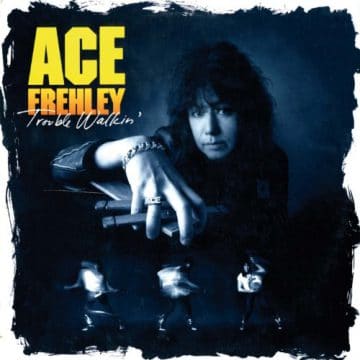 Review:
By the time Ace Frehley released his third album in two years, expectations were not what they had initially been two years prior. On Trouble Walkin’, it seemed as though Ace and co. had decided to take a more straight ahead, rock approach. Gone was the moniker Frehley’s Comet that had graced the previous two releases. Gone also was key member and songwriter Tod Howarth. What remained was Ace Frehley and long-time bass player John Regan. Replacing Howarth was Frehley’s Comet alumni Richie Scarlett. Some may be left scratching their heads as to how Scarlett was alumni. Well, truth be told, Scarlett was in Frehley’s Comet before the band released the 1987 debut only to be replaced by Howarth. As for the drumming duties, I believe that both Anton Fig and Sandy Slavin did work on this album. The drummer status in the band was always confusing as over that two year period Anton Fig, Jamie Oldaker and Sandy Slavin all sat behind the drummer’s seat in Frehley’s Comet. Of course, Fig was a regular in David Letterman’s band, so touring was almost next to impossible leading to Frehley‘s hiring of others to take the helm.

What can actually be said about this album? For me, when it was released, I was quite intrigued to hear what had been put to tape. Much Music was kind enough to play the first video and single which was a cover of ELO’s “Do Ya.” I recall seeing the video before Pretty Boy Floyd’s “Rock N’ Roll (Is Gonna Set The Night On Fire) on the Power Hour one Thursday afternoon and thinking, “This is really, really good!” At the time of release, ’80s hair rock was so mainstream. If you picked up Metal Edge magazine in this time, you’d see advertisements for new albums by Alice Cooper, Michael Monroe, Enuff Z’Nuff, Ace Frehley, Pretty Boy Floyd, Britny Fox and Steve Steven’s Automatic Playboys. This was late ’89 and life couldn’t be any better for a hard rock fan like myself.

Upon actually buying and popping the tape in my machine, I was taken by what I heard. This album was exactly what I had hoped for the year prior when the band released Second Sighting. That album was rushed and sounded like it. Although Tod Howarth saved it with a few great melodic, rock songs, something just wasn’t as it should be and it was somewhat of a letdown from the debut release.

With Trouble Walkin’, it appeared that Ace was back [yet again]. Wasn’t that a self-proclamation in 1987 anyways? I didn’t think he was really gone that long to begin with? The opening track, “Shot Full of Rock” immediately has the listener stomping their hands and clapping their feet [or vise-versa]. Of course “Do Ya” – [self-explanatory – please return to the following paragraph!] was very well done. “Five Card Stud” was such a great song with quite the prolific song title to boot. Of course, it would not be an Ace album if the song title did not somehow go hand in hand with the man’s persona. “Step right up ladies because Ace is your stud!” It may not be exactly how Ace wanted it portrayed, but that’s my own slightly delusional perception.

What I really find intriguing about this album is the next song. “Hide Your Heart” would ironically appear on two albums in the same year. What makes it even more interesting is that it was on Hot In The Shade by Ace’s former band. I believe KISS bassist Gene Simmons actually contacted Ace about leaving the song off of Trouble Walkin’ as that was to be KISS’ first single on Hot In The Shade. Whose version is better? It’s hard to say really. I enjoy both. Ace’s is a little bit more bare-bones, where KISS’ version is very slick, but the fact that there is a video for this song by KISS, establishes it as possibly more of a success as it is easy to imagine the imagery in your head while you listen to the KISS version. It puts the story into perspective. To me, that was the great thing about video. If executed properly, it is in your memory forever.

“Lost In Limbo” is possibly the first track on the album that should stay “Lost in Limbo”. There is nothing about this song that excites me. It’s not horrible, but it’s just album filler to me. Now like most recordings in 1989, be it cassette or vinyl, you would have to turn it over. Side two begins with what I would term as an Ace Frehley forgotten anthem. The opening guitar progression just feels natural and full of life. The track “Trouble Walkin’” is a suitable title for the man in question. Ace as everyone knows has always been rough around the edges. The great thing about him though is that he knows it and he owns it. The album cover that coincides with title and track, really is quite humorous as it features Frehley front and center, holding up three miniature live figures of himself as puppets. Insinuating that he could possibly be having trouble walking? You be the judge of that.

On “2 Young 2 Die”, Ace takes a break from singing and Richie Scarlett sings the one and only track on the album that his vocals are featured. For years, I actually thought this was Peter Criss behind the microphone. The range of vocal was very close. It wasn’t until recently that I discovered it was Scarlett. Honestly, not a favorite track, but decently placed. As the album gets to the end, I find myself getting excited about talking about the next two tracks. “Back To School” features none other than Sebastian Bach. You know that guy? He sang in Skid Row years back! He’s still around, but seems bitter about many things these days. Possibly, if the boys in Skid Row would just play one more show with him, he may just mellow out a bit. Regardless, if it wasn’t for him, this track wouldn’t be as great as it is. Of course Ace sings in with his normal, non-chalant, I don’t give a fuck attitude, but when Bach appears over-top it adds this depth that makes for a great song. Possibly the lyrical content is suspect, but this is 1989 so who gives a fuck. The track also features the background vocals of Skid Row members Rachel Bolan and Dave “The Snake” Sabo. Overall, a great element to a fine album.

“Remember Me” is just an amazing bluesy jam of sorts. It sounds as though it’s live in a club, but after all these years I think that’s debatable. Still, this song just oozes with cool. It may supersede all other tracks on the album. This is plain and simple, a fun rock song. Isn’t that what we all want? I mean, picturing it as I listen, I can see the boys in the band, playing at a seedy bar in New York City. You know the one with the beer stained carpet and a stench that almost makes one vomit, but you ignore all that because the music is so magical. We’ve all been to that type of bar one time or another.

The album closes out with part 3 in the “Fractured Mirror” sequence simply titled “Fractured III”. Is this really necessary? Maybe? Maybe not? I still listen to it when it comes on. It’s part of the album experience. Remember the days when you listened to the album front to back? That’s the way the artist intended it to be. So many today just prefer to hear the single on You Tube or Spotify. Me being a traditionalist, I want to hear it all.

Overall, with the exception of “Lost In Limbo” this may be my favorite Ace Frehley release to date. I thought the label and management worked very hard to re-establish Ace as a hard rock commodity. The band was great, the songs were great and it was easily marketable. Did it fail in some ways? I think so, but like so many other albums that were released in the same time period, it was just hard to take a percentage of that pie. Regardless, who really cares! Successful, or not successful, a great album is a great album. This is still a staple on my turntable to this day. May Trouble Walkin’ live on in the hearts of the fans forever!!!

Ace Frehley – Do Ya

Frehley’s Comet cover of The Move / E.L.O. song Do Ya